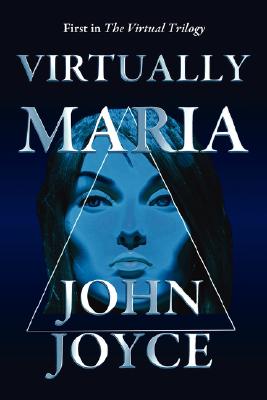 
Not On Our Shelves—Ships in 1-5 Days
(This book cannot be returned.)
"Virtually Maria" is the first book in John Joyce's Virtual Trilogy - A quest by one man to save the love of his life from murder by travelling back in time. It is a story of state of the art technology, forgotten forces, and exotic locations all over the world. Our hero will be guided by the artificially intelligent Minerva computer - an electronic Tinkerbell with a mind of its own. Theo Gilkrensky, computer genius and chairman of the electronics multinational GRC, is engrossed in the final stages of development of the revolutionary Minerva computer, when his wife Maria walks out on him and is killed by a car bomb. Wracked by grief and guilt, Theo retreats with Minerva onto a remote island off the south coast of Ireland until the crash of a GRC-owned airliner near Cairo forces Jessica Wright, his chief executive and former lover, to drag him back from exile. Using the Minerva display data from the crash investigation, Theo manages to exonerate his corporation, but in the process reveals that he has reprogrammed the computer's user interface to look, think and speak like his beloved Maria. Investigating further, Theo discovers that the crash was caused not by computer failure, but by a unique radiation coming from the Great Pyramid of Cheops. He finds a previously undiscovered chamber - a place where unseen energies from all over the world are concentrated to warp the very fabric of space and time. Theo is further astounded when Minerva calculates that this phenomenon could be manipulated to travel back in time and save his wife, Maria from death. Meanwhile, others are out to steal the revolutionary Minerva, while Yukiko Funakoshi, the half-caste daughter of a man Theo once wronged, is homing in on Cairo with an arsenal of arcane weapons and millions of dollars at her disposal for Theo's destruction. First published by Poolbeg Press in 1998, Virtually Maria was "Book of the Month" at the Easons Bookstore chain in Ireland. It will be followed in 2008 the other two books in the Virtual Trilogy - "A Matter of Time," and "Yesterday, Today and Tomorrow," both to be published by Spindrift Press, Dublin.