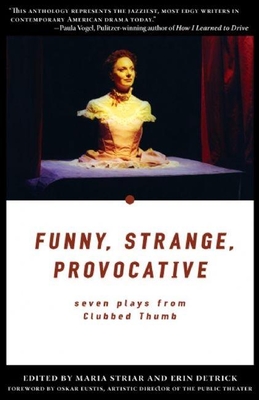 
Special Order—Subject to Availability
This anthology includes seven plays produced by Clubbed Thumb, the Obie Award-winning downtown New York City theater company that burst onto the new play scene in 1996. Edgy and thought-provoking, each play is funny, strange, and provocative in surprising, widely varying ways -- including an apartment that both adores and despises its inhabitants in Crumble (Lay Me Down, Justin Timberlake), a metropolitan housewife who senses that something is watching her in 16 Spells to Charm the Beast, and a group of traveling freak show performers who reveal a deep humanity underneath their crowd-drawing deformities in Freakshow, among other uniquely inventive stories. For over a decade, Clubbed Thumb has had its finger firmly planted on the pulse of new work, and these plays prove it. Includes the plays The Typographer's Dream by Adam Bock, Crumble (Lay Me Down, Justin Timberlake) by Sheila Callaghan, Demon Baby by Erin Courtney, 16 Spells to Charm the Beast by Lisa D'Amour, Inky by Rinne Groff, Dearest Eugenia Haggis by Ann Marie Healy, Freakshow by Carson Kreitzer