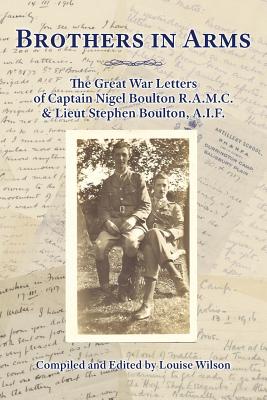 By Louise Wilson (Compiled by)


Not On Our Shelves—Ships in 1-5 Days
(This book cannot be returned.)
Two brothers. Different armies When war broke out in August 1914, University of Sydney medical graduate Nigel Boulton was training as a paediatrician in London and he promptly joined the Royal Army Medical Corps of the British Expeditionary Force. Back in Sydney, his younger brother Stephen left the Commonwealth Bank's head office in January 1915 to enlist as an Artillery Gunner with the Australian Imperial Force. Two national identities Both men were born in Australia of English parents. Both attended the British Orphan Asylum at Slough in England and The King's School at Parramatta in Australia. Which country was home? Two distinct voices Anglophile Nigel (Dearest Mother) has a strategic and medical view of the war. Aussie Stephen (My dear Matee) tells his day-to-day story of front-line artillery life, the ravages of dysentery and the trials of artillery officer training at Lord's in London as he progresses to the rank of Lieutenant in the 2nd Field Artillery Brigade. An overview of 1914-1918 The Boulton brothers' letters to their widowed mother living in Sydney sweep from the outbreak of hostilities in Europe through Egypt and Gallipoli to Pozieres and other major artillery battles on the Western Front, to the withdrawal of Australian troops in early October 1918, to the occupation forces entering Germany in December 1918. A lesson for us in the practice of gratitude It's rare to find a set of letters like these. The story of the Boulton brothers in the service of their country will stay with you long after you turn the last page. Six more hours would have changed everything. Author Biography: Louise Wilson has a passion for history, mystery and romance, so no-one has ever needed to tell her to 'Go and get yourself a life'. Born and raised in the northern beaches area of Sydney, she's lived in two Australian country towns (Dubbo and Yea), Papua New Guinea, London and Hong Kong before settling in Melbourne. She's been a high school mathematics teacher, an agricultural economist, a management information specialist, the manager of a foreign exchange department and a director of a merchant bank. She's also volunteered with many community groups with a focus on education. She often helps her daughter who has two sets of twins born 14 months apart. Now she's come full circle, back to exploring an old love of history dating from her high school days. Intrigued by Australian history, she's discovered some fascinating forebears who've helped create that history, including 'Robert Forrester, First Fleeter'. He's the subject of one of her three acclaimed books about early convict settlers of the beautiful Hawkesbury district near Sydney. All three books have received awards from the independent judges of the Australian Institute of Genealogical Studies (AIGS). Louise loves to bring new aspects of her country's history to life, as she's done with her latest book 'Brothers in Arms'. It's based on the valuable and unique WW1 correspondence of two brothers in different armies, Australian and British, plus her own trademark meticulous research. The result is an emotionally-engaging start-to-finish story of the Great War, not to be missed by the general reader and the specialist historian.