The Worst Interests of the Child: The Trafficking of Children and Parents Through U.S. Family Courts (Paperback) 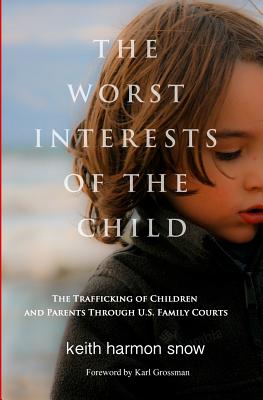 The Worst Interests of the Child: The Trafficking of Children and Parents Through U.S. Family Courts (Paperback)


Not On Our Shelves—Ships in 1-5 Days
(This book cannot be returned.)
"Keith Harmon Snow's meticulously documented investigation into sex-trafficking of children by American judges is not to be missed. This scandal is one of the most important censored stories in our country today. I might not believe what Mr. Snow has written if I had not independently investigated two dozen cases not discussed in his article, and found ample evidence of the precise dynamics he lays out for us here. Anyone who says they care about child welfare needs to learn what is happening in family courts and take action until it is stopped. Once you start reading this expos , you won't be able to put it down." -Lundy Bancroft Author of Why Does He Do That? History's largest-selling book on domestic violence.
KEITH HARMON SNOW is an international award-winning journalist, photographer and writer who has worked in 45 countries. He is the 2009 Regent's Lecturer in Law & Society at the University of California Santa Barbara, recognized for over a decade of work contesting official narratives on war crimes, crimes against humanity and genocide. Graduating a Bachelor of Science magna cum laude and Master of Science in Electrical Engineering, he worked for GE Aerospace Electronics & Defense Laboratories in classified U.S. government aerospace and defense programs from 1985 to 1989. A former staff writer and photographer for the Japan International Journal, his works appeared in major Japanese newspapers including the Yomiuri Shimbun and Asahi Weekly, and his travel features have regularly appeared in Wingspan, the magazine of All Nippon Airways. In 2000 Mr. Snow worked at the International Criminal Tribunal on Rwanda, and from 2004 to 2007 he worked as a journalist accredited with the United Nations Observers Mission in Congo (MONUC), as a human rights investigator for Genocide Watch, and as genocide investigator for the United Nations in Ethiopia. He has worked as an independent journalist and human rights investigator in Afghanistan (2006) and Mongolia (2008). In 2011 Mr. Snow testified at the International Court of Justice in Spain regarding the war crimes, crimes against humanity and genocide committed by the high officials of the Rwandan Patriotic Front/Army. Mr. Snow has also provided expert testimony in U.S. Department of Homeland Security refugee asylum hearings, and at a special U.S. House of Representatives hearing on genocide and covert operations in Africa. Mr. Snow is persona non grata in Rwanda and Ethiopia, and in 2009 he was banned for life from Smith College, Mt. Holyoke College and Hampshire colleges for questioning a Smith College professor who has advanced the false U.S. state department narratives on genocide and war in Africa. Mr. Snow spent four months investigating corruption and trafficking of children and families in U.S. Family Courts for this book. In 2014 he testified before the Connecticut Task Force to Study Legal Disputes Involving the Care & Custody of Minor Children. Mr. Snow is also a professional tree climber who teaches recreational tree climbing and tree climbing for arborists in Williamsburg, Mass. In 2015 he completed his certification by the Grof Transpersonal Training as a facilitator of Holotropic Breathwork TM.