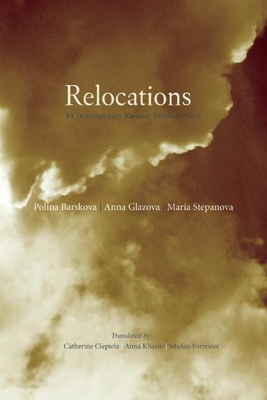 Polina Barskova, Anna Glazova, and Maria Stepanova all were born in the early to mid-1970s and came of age during perestroika. They are old enough to have visceral memories of Soviet life but young enough to move adeptly with the new influences, new media and new life choices introduced in the post-Soviet era. In distinct ways all three are engaged in the project of renovating Russia's great modernist tradition for a radically different historical situation. They write poems of imaginative daring, pushing recognizable scenarios into the fantastic, the surreal or the speculative, bending form and language to the task. They also display a cerebral firepower boosted by their education in institutions Soviet, European and American, and which they exercise in their chosen professions--Barskova and Glazova are academics, teaching at Hampshire College and Cornell University respectively, and Stepanova is chief editor of the influential online journal Open Space. Barskova, Glazova, and Stepanova read one another attentively and have published reviews of each other's work, a mark of how they perceive themselves as engaged in the same project of modernizing Russian poetry. The broad trend in Russian poetry after the collapse of Soviet-era literary paradigms has been dispersal--of hierarchies, of institutions, of poetic models and of poets themselves, many of whom live and work outside the cultural capitals, whether abroad or in the provinces. These poets are moving beyond the Russian modernists' engagement with totalitarianism to address subjects such as the Holocaust and the war in Chechnya, and they are doing so in a fundamentally new mode.

Relocations is a highly enjoyable collection of poetry introducing the English-language world to three incredibly diverse and talented women poets writing in Russian that could be as meaningful to a casual fan of poetry as to a comparative literature scholar. A much-needed, timely, fun, and all-too-relevant read in 2014. --Will Evans, Three Percent

Catherine Ciepiela: Scholar and translator of modern Russian poetry, she is the author of a book on Marina Tsvetaeva and Boris Pasternak (The Same Solitude, Cornell UP, 2006) and co-editor with Honor Moore of The Stray Dog Cabaret (NYRB 2006), a book of Paul Schmidt's translations of the Russian modernists.Anna Khasin: Independent translator living in Boston. Her translations of Anna Glazova were published by Shearsman Books under the title Twice Under the Sun (2008).Polina Barskova: Two collections of her poetry in translation appeared recently: This Lamentable City (Trans. Ilya Kaminsky, Tupelo Press, 2010), The Zoo in Winter (Trans. David Stromberg, Boris Dralyuk, Melville House Press, 2011). Barskova now teaches Russian literature at Hampshire College.Anna Glazova: Selections of her poems have been published in various literary magazines and anthologies and translated into German and ChineseCurrently, she holds a Mellon Postdoctoral Fellowship at the Institute for the Humanities and the Department of German Studies at the Cornell University (Ithaca, New York).