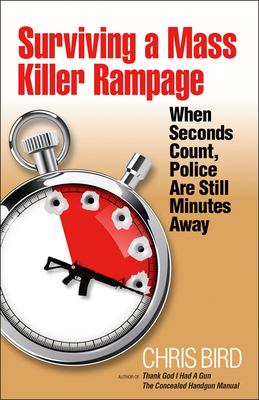 
Special Order—Subject to Availability
The single most important factor in a rapid mass killer incident is time and this book provides advice for the armed or unarmed citizen and the steps that one can take to increase his or her chances of survival. The average active killer will kill or wound between four and five people a minute. Police reaction time varies from a couple of minutes to half an hour. The best way to stop these murders is to have someone close to the scene with a gun and the training to use it. The book describes many major incidents and what can be learned from them and also includes chapters that deal with lone wolf attacks, gun-free zones, and the type of incidents that are likely to be seen in the future.
Chris Bird is a certified concealed handgun instructor, a director of the Texas Concealed Handgun Association, and the author of The Concealed Handgun Manual and Thank God I Had a Gun. He lives in San Antonio, Texas. Massad Ayoob is a firearms and self-defense instructor. He is the author of more than 20 titles, including In the Gravest Extreme and Deadly Force. He lives in New Hampshire.
"Over the years, Chris has done substantial primary research— that is, debriefing the participants and survivors, not just cutting and pasting news stories —on incidents of self-defense and defense of others. The result has been an exemplary series of 'you are there' books, analyzing not only what happened, but the lessons that were learned."  —Massad Ayooblaw, author, Deadly Force

"Chris Bird has written the book the left-wing media does not want you to read. These stories illustrate that nothing is more effective at stopping dangerous people than well-trained individuals with the firepower to fight back. This is must reading for anyone who believes in the power and importance of the Second Amendment."  —Rick Perry, governor of Texas, on Thank God I Had a Gun