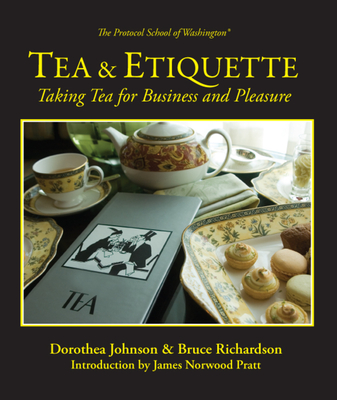 Afternoon tea conjures up both feelings of elegance and gentility. It is, after all, synonymous with civility and blessed with the endearing quality of being part of the world's enduring cup of humanity. The customs and courtesies associated with this most civilized ceremony, however, are disquieting to the uninitiated. Fear of committing "tea faux pas" is on the upturn, as tea is now serving not only a social function, but a professional one as well-an alternative to the business lunch or dinner. This has created an unprecedented demand for learning the essentials of tea etiquette as executives meet in hotel lounges to discuss business over a cup of tea.

This book includes tea history, tea and health information, steeping guides, as well as elements of both social and business tea etiquette. The authors have given you all the information needed to either serve or be served at a host of tea occasions.

Bruce Richardson is a tea blender and writer who has been active in America's tea renaissance for over two decades. He is the owner of Elmwood Inn Fine Teas headquartered in Danville, Kentucky. Bruce serves as Tea Master for the Boston Tea Party Ships & Museum and Contributing Editor for TeaTime and Tea Journey magazines. Bruce has authored fourteen books on tea, icluding The Great Tea Rooms of Britain, Tea & Etiquette, and The Book of Tea. He is a frequent guest speaker at tea events across the United States.

Dorothea Johnson is the founder of the Protocol School of Washington. She has presented seminars and briefings on manners to more than 100,000 individuals worldwide. Dorothea has authored five books, including the bestselling Modern Manners with Liv Tyler as well as Children's Tea & Etiquette. She has appeared several times as an etiquette expert on The Ellen DeGeneres Show. Johnson's life is dedicated to equipping people with skills so that they might feel comfortable in all social settings. Her former son-in-law, Aerosmith's lead singer Steven Tyler, calls her the "Protocol Police," but granddaughter, actress Liv Tyler, believes strongly in Gramm's advice on manners. Dorothea Johnson has accompanied her famous granddaughter to film sets around the world since the actress was in her mid-teens. Together, they have dined with the most influential people in the world of film. Now the glamorous cover girl-turned-film star is herself a mother of a young son, Milo.

American Tea Sage James Norwood Pratt is the author of such books as The Tea Dictionary and The Tea Lovers' Treasury. He is a frequent speaker at tea events worldwide and he serves as Contributing Editor for TeaTime magazine.