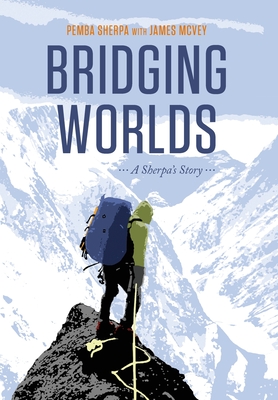 Bridging Worlds brings us Pemba Sherpa's unique perspective on the vastly different worlds of Nepal and the United States. Pemba and his co-author, James McVey, take the reader on Pemba's life journey from a poor, remote Nepalese village in the Khumbu, to accomplished mountaineer, expedition leader, and successful U.S. businessman - and back to Khumbu where his journey began, to build a bridge, hydroelectric power plant, and bring hundreds of thousands of dollars in earthquake relief to his native people.

Moreover, Pemba and James tell the story of the Sherpa people, their history and culture, and their central role in the Everest expedition industry. From a Sherpa's perspective, Pemba details the exceptional dangers Sherpa's face as expedition workers in the Himalayas, the poor wages they earn compared to the millions of dollars collected annually by the government in permit fees - and the alarming state of the climbing industry on Mt. Everest today - not the least of which is the amount of garbage and human waste on Everest that threatens the water supply system of Khumbu.