The Great Divide: The Story of New Zealand & Its Treaty (Paperback) 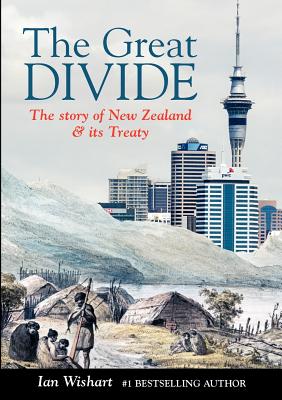 The Great Divide: The Story of New Zealand & Its Treaty (Paperback)


Not On Our Shelves—Ships in 1-5 Days
(This book cannot be returned.)
New Zealand to many is 'Middle Earth', home of the Lord of the Rings trilogy, but it was also the last major land mass on the planet to be settled by humans. The country was catapulted kicking and screaming from the stone age to the space age within 200 years of Captain Cook setting foot there... Who really got to New Zealand first? Which version of the Treaty of Waitangi is the most accurate? What impact did a massive asteroid strike in the 15th century have on human settlement in the South Pacific? IT'S A STORY THAT WILL SURPRISE YOU The biggest known earthquake-caused tsunami can create 60 metre walls of water - around six times larger than the Japan tsunami. This New Zealand one created by what is now known as the Mahuika comet strike - after the Maori god of fire - was what scientists call a "mega-tsunami", 220 metres tall, 22 times higher than the Japanese tsunami, as it thundered up the South Island's east coast. Waves that high have been known to penetrate up to 45km inland in other parts of the world. To put this in perspective, if you were dining in the revolving restaurant at Auckland's Sky Tower, 190 metres off the ground, you would still be 30 metres (100ft) underwater. A STORY TOLD WITH HUMOUR: When dawn broke the following morning, more canoes pulled alongside and translator Tupaea remarked to Cook the overnight guests were yelling over the rails to their friends, "It's OK to come on board, the white men don't eat people " "From which," Cook wryly and cautiously noted in his journal, "it should seem that these people have such a Custom among them." IN THE VOICES OF THOSE WHO WERE THERE: "About dinner time three canoes came alongside of much the most simple construction of any we have seen, being no more than the trunks of trees hollowed out by fire without the least carving or even the addition of a washboard on their gunnels. "The people in them were almost naked and blacker than any we had seen - only 21 in all - yet these few despicable gentry sang their song of defiance and promised us as heartily as the most respectable of their countrymen that they would kill us all." A STORY OF MISPLACED TRUST: Turning to Lieutenant Roux, du Fresne added: "How can you expect me to have a bad opinion of a people who show me so much friendship? As I only do good to them, assuredly they will do me no evil." AND THE CLASH OF CULTURES: By seven pm, word came through from the ships that "a great many more canoes, full of natives, had landed on the island." This was an all-out war involving, on one side, a battalion-strength team of Maori warriors drawn apparently from numerous tribes (about as many warriors as the current New Zealand Army can comfortably muster for any single military tour at the moment), and on the other 50 armed Frenchmen, most of them sailors. One side, of course, had gunpowder. The other side desperately wanted gunpowder. AND LESSONS LEARNED THE HARD WAY: Northland Maori in particular were beginning to amass quite a collection of captured weaponry, from the tempered steel of cutlasses and swords to the power of the mighty musket. The cardinal rule - never bang a casket of gunpowder - had been tested and learnt by the Ngati Uru of Whangaroa - and Maoridom's inevitable catch-up with European technology and power was well underway. There was, however, an even more potent force sailing over the horizon: missionaries. IN SHORT, IT'S OUR STORY...a story of migrants, the people they met, the future they forged.