The Trilogy of Future Memory (Paperback) 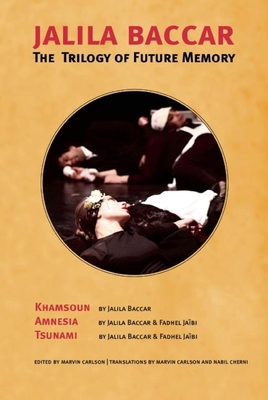 The Trilogy of Future Memory (Paperback)


Special Order—Subject to Availability
Tunisian playwright and actress Jalila Baccar and director co-author Fadhel Jaibi are two of the most important voices in contemporary Arab theater. No theatre artists were more closely involved with the ongoing events of the Arab Spring nor more astute critics of the constantly shifting political scene and their plays are enormously helpful in understanding the cross-currents of a country like Tunisia at the opening of the twenty-first century. Baccar's roles, acting and theatrical narratives, co-created by her director and husband Fadhel Jaibi, are extremely intricate, psychologically multi-layered, and have the uncanny ability to capture the complexity and depth of grand themes prevalent in Arab societies.
Baccar has performed in over twenty of her plays, including major theatrical productions that have been staged worldwide by Jaibi: "Junun" (Dementia, 2009) at the Edinburgh Festival, "Khamsoun" (Captive Bodies, 2006) the first Arab play to be performed at the Theatre de L Odeon in Paris, and "Araberlin" (2002), among many others. Together they founded Tunisia's first private theatre company, Le Nouveau Theatre in 1976, as well as (in 1994) Familia Productions, instrumental in modernizing Tunisian theatre and engaging it in contemporary political concerns.
This collection of their recent work, "The Trilogy of Future Memory," includes "Khamsoun" (2006), translated by Nabil Cherni, and "Amnesia" (2010), and "Tsunami" (2013) translated and Marvin Carlson who has also provided an introduction.