Divorced, Bigamist, Bereaved? The Family Historian's Guide to Marital Breakdown, Separation, Widowhood, and Remarriage: from 1600 to the 1970s (Paperback) 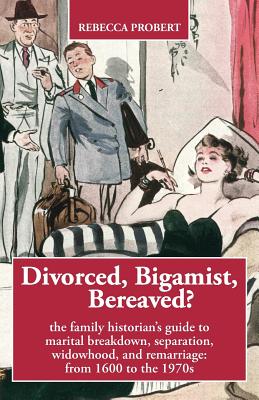 Divorced, Bigamist, Bereaved? The Family Historian's Guide to Marital Breakdown, Separation, Widowhood, and Remarriage: from 1600 to the 1970s (Paperback)


Not On Our Shelves—Ships in 1-5 Days
(This book cannot be returned.)
Most of our ancestors were wed only once, and after the death of a spouse did not remarry. Yet every family tree has individuals whose lives did not fit that pattern: a minority of the bereaved chose to take a second or even a third spouse, and with some marriages breaking down and divorce increasingly an option there were always bigamists and divorcees ready to find a new partner. In this follow-up to the bestselling Marriage Law for Genealogists, Rebecca Probert explains divorce, bigamy, bereavement and remarriage from the 1600s through to the late twentieth century. How long did marriages last? Was the loss of a spouse in middle age as common as we might assume? And for those who did lose a spouse, what factors influenced their choice to remarry or remain single? What signs hint that a marriage might have been bigamous, or that a divorce had been hushed up? How were marital breakdown, bigamy, and cohabitation linked at a time when relationships outside marriage were rare and unacceptable? From the evidential requirements of the divorce courts through to the testimonies of convicted bigamists, and from men who married their late wife's sister through to couples who went through more than one wedding ceremony together, this book examines law and social custom from every angle. Rebecca Probert is the leading authority on the history of marriage law and practice in England and Wales. She holds a chair in family law at the University of Warwick and regularly appears on TV and radio.