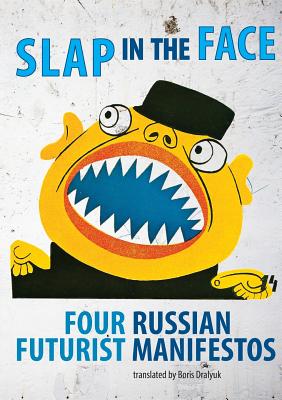 Translated from the Russian by Boris Dralyuk

"The emergence of the New poetries has affected the still-creeping old fogies of Russian little-ature like white-marbled Pushkin dancing the tango."

The four manifestos collected in A SLAP IN THE FACE rattle with the verbal ingenuity and vitriolic verve of Russia's most accomplished Futurist collective--known as Hylaea and, for a brief period, the Cubo- Futurists. Organized in 1910-11 by the Burlyuk brothers, the group featured the wildly talented poets Velimir Khlebnikov and Vladimir Mayakovsky, as well as the master of "transrational" ("zaum") poetics, Aleksey Kruchenykh. The Hylaean program of total destruction and uncertain renewal offers an ominous parallel to the political turmoil of the Great War and the events of 1917. Dralyuk's annotations provide information on Hylaea's tumultuous history, its literary battles and short-lived alliances, and the biographies of its members.

"These four manifestos of Russian Futurism, charting key points in the rapid unfolding of the Russian avant-garde, provoke the appreciative bourgeoisie while declaring the liberation of the word, the phoneme, and even the grapheme Dralyuk's brisk, inventive translations convey the energy and rowdiness of the original."--Eugene Ostashevsky

"Boris Dralyuk's new translation brings these manifestos to life with fire, passion, clarity, humor, and the unmistakable flavor of inventiveness, of verbal fireworks.What a joy to see Mr. Mayakovsky in English, slapping the face of the adoring public, throwing Pushkin overboard--with the passion of all young artists, yes, but also with humorous abandon, brilliance, and delicacy of detail. Mayakovsky and Khlebnikhov were revolutionaries who believed in the 'word as a creator of myth, ' who believed that the 'richness of the poet's vocabulary is his justification.' Bringing their manifestos into English today is a very timely event, one thinks.This is an important new translation."--Ilya Kaminsky