Cornell Journal of Architecture 12: After (Paperback) 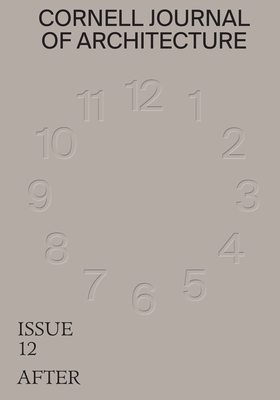 Cornell Journal of Architecture 12: After (Paperback)


Not On Our Shelves—Ships in 1-5 Days
Organized around a timeline that demonstrates the range of presents and afters we find ourselves contemplating, this volume of the Cornell Journal of Architecture considers our terrestrial occupations from a variety of real and imagined perspectives, from the prehistoric to the future-imperfect. It seems that--with increased urgency--we are more frequently finding ourselves grasping for an after, especially as we face futures with apprehension. After exists at different scales of time and context: there's after an instant, after a day, after an era. And each after contains both a conclusion and a beginning. This volume of the Cornell Journal of Architecture looks at a vast range of the afters we architects find ourselves confronting, and offers not just warnings, but solutions; not just reminders, but projections. Because, while we humans are obliged to stand squarely within the present, as architects we're equally obliged to cast our work into a hereafter that can be only loosely understood. And then we can hope that, in the aftermath, our intentions bear some resemblance to their consequences. With Contributions of a vast selection of architects, artists, designers, historians, and geoscientists, including Peter van Assche, James Biber, Olalekan Jeyifous, Michael Murphy with Jha D Williams, Felix Heisel, Jacques Ferrier, Common Accounts, Meredith Miller and T+E+A+M, and many others, representing an extensive diversity of approaches for identifying techniques of transcending pasts and presents.