A Surgeon's Story: The Autobiography of Robert T Morris (Paperback) 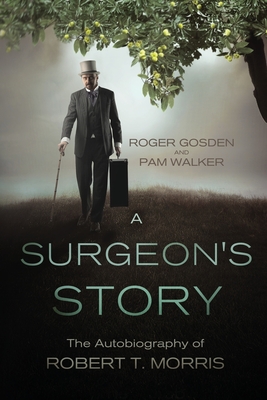 A Surgeon's Story: The Autobiography of Robert T Morris (Paperback)

By Roger Gordon Gosden (Other)

The story of a renowned New York doctor, Robert T. Morris (1857-1945), who struggled with a reactionary profession to pioneer sterility, small incisions, and better wound-healing in surgery. Blessed with abundant energy, sagacity, and long life, he also achieved distinction as a naturalist, horticulturist, and explorer, celebrating nature with brilliant prose and poetry. For those days, Morris was a rare visionary, grounded in science and courageously fighting on the side of suffering humanity, though few remember him today. This is an updated edition of a 1935 classic, brimming with case histories starting from the late Victorian Age. The new book is annotated and illustrated, and includes previously unpublished chapters.

Robert Morris was an eminent surgeon and a noted naturalist, explorer, and horticulturist. He was an inquisitive man who wrote about a wide range of subjects and published poetry. This well-rounded life began in Seymour, Connecticut, in 1857 as the eldest child of Luzon Burritt Morris, a lawyer and sometime Governor of Connecticut, and Eugenia Laura Tuttle Morris, a well-known author. He received a broad education including the classics at Hopkins Grammar School in New Haven. Boyhood interests in wildlife and hunting led him to study biology at Cornell University, but instead of following a natural aptitude for science he enrolled in medicine at the College of Physicians and Surgeons of Columbia University, graduating M.D. in 1882. A scientific outlook was conveyed into his career, which was unusual for surgeons in those days.

His working life spanned enormous changes in medicine, technology, and society, for which he was a sharp observer. Early on he visited the great medical centers in Germany and France, and in England a meeting with Joseph Lister had a lasting impact. Morris became one of the first doctors in America to practice aseptic or "Listerian" surgery and introduced many surgical innovations. As he grew in experience and confidence, he was often critical of conventional practices and became regarded as a radical, yet in demand from patients and many of his ideas eventually gained grudging acceptance from the profession. He poked fun at the "ghastly gash", as he characterized the typical incisions made by surgeons in the late Victorian era, and ridiculed stuffing of the body cavity with gauze as "taxidermy". He believed "the patient is on the whole his own best antiseptic" and that less invasive procedures are often more beneficial. He was famous for his "inch-and-a-half incision with a week-and-a-half confinement", and minimal instruments for appendectomies, one of his specialties.

Morris had a formidable gift of language which he used to censure quacks, posers, and faddists. Fearless of criticism, he welcomed vigorous debate as the grand avenue for progress. Nevertheless, speaking his mind did not obstruct the path to high office in his profession. He was a professor of surgery for over twenty years at the New York Post Graduate Medical College and served as the President of the American Association of Obstetricians and Gynecologists from 1907, and of the American Therapeutic Association from 1916.

He retired to his 440 acre wooded estate near Stamford which he preserved as a wildlife sanctuary, much of which is enjoyed today by the public as the Mianus River Park. With a dynamic career and exploration of the wilds of Canada behind him, he threw himself into experimental horticulture and writing about medicine, public affairs, conservation, and growing nut trees. The last of his ten books, Fifty Years a Surgeon, was an instant success.