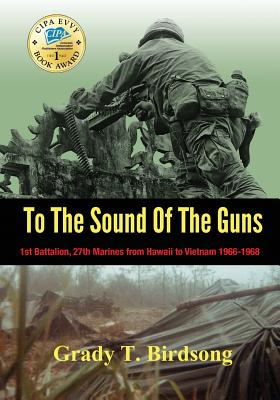 To The Sound Of The Guns: 1st Battalion, 27th Marines from Hawaii to Vietnam 1966-1968 (Paperback - Perfect Bound Blk/Wht Edition)

This is the little-known history of the men of 1/27, a 5th Marine Division battalion of Iwo Jima World War II fame--their seven-month story of sacrifice, camaraderie, and bravery.

Compiled and authored by one of them, To The Sound Of The Guns is the journey of 1st Battalion, 27th Marines--an undermanned maneuver Battalion--in Vietnam during the Tet Offensive of 1968, their participation in the Hue City area and in Operation Allen Brook. One hundred and twelve of these men gave up all their tomorrows, their memories forever etched in Marine Corps history.

As a result of countless combat engagements, the Marines of 1/27 were awarded almost 700 Purple Hearts, rallying to their battle cry, "To the Sound of the Guns."

Grady T. Birdsong enlisted in the U.S. Marine Corps in 1966, serving two combat tours in Vietnam in 1968-1969. He is the author of A Fortunate Passage: Two Families' Journey into the Heartland, and co-author of The Miracle Workers of South Boulder Road: Healing the Signature Wounds of War with Colonel Bob Fischer, USMC (Ret).

"Grady Birdsong's book is a combination of well-researched operational history and a moving and deeply personal account of the author's own combat experiences in Vietnam. It is both history and story. The places, the events, and most especially, the Marines and Sailors of whom the author writes, become vividly real, transporting the reader to that distant place and time. A highly recommended addition to the record of the U.S. Marines in the Vietnam War."

Published by the History and Museums Division