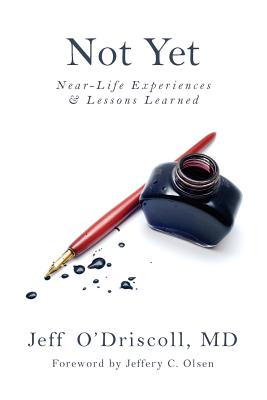 
Not On Our Shelves—Ships in 1-5 Days
(This book cannot be returned.)
NOT YET follows an experienced emergency physician, Jeff O'Driscoll, MD FACEP, through a series of shared-death experiences and his efforts to help others through the most harrowing challenges of their lives. NOT YET focuses particularly on Dr. O'Driscoll's twenty-year friendship with Jeff Olsen, a man who had a powerful near-death experience (NDE) at the time of the car accident that took his wife, his son and his leg. While Olsen passed through his NDE, Dr. O'Driscoll saw and communicated with Olsen's deceased wife, Tamara. The first year of Jeff & Jeff's friendship was filled with challenges and powerful lessons. O'Driscoll's candor and vulnerability are compelling. His story is transformative.
Jeff O'Driscoll has had extensive experience with shared death phenomena during 25 years as an emergency physician in a level-one trauma center. He has welcomed souls arriving into this sphere of existence and bid farewell to others who were leaving. Sometimes he encountered those who hovered between staying and leaving. His experiences have enabled him to assist others through their near-death experiences (NDEs). Dr. O'Driscoll first met an unconscious Jeff Olsen in a trauma suite while Olsen passed through a NDE. They've now been friends for over twenty years, frequently discussing the tenuous terrain near the borders of mortality and lessons learned beyond the veil. Dr. O'Driscoll recently took a leave of absence from emergency medicine to do consulting and to write. Many lessons are incorporated in his children's books, available at MucktheDuck.org, and his recent novel, WHO BURIED ACHILLES?, available on Amazon. Dr. O'Driscoll obtained his MD at the University of Utah and completed his internal medicine residency in Salt Lake City, Utah. He is board certified in internal medicine and is a fellow of the American College of Emergency Physicians. He has published works in theology, ancient scripture, history, medical science and medical administration. In addition to writing, Dr. O'Driscoll enjoys painting, sculpting and cycling. He is a talented public speaker and loves teaching both small groups and large audiences. He and Sheila have been married for thirty-one years. They have five children and three grandchildren.