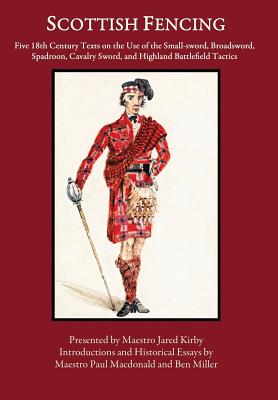 The martial heritage of Scotland and its legendary swordsmen have captured the imagination of readers worldwide for centuries. Likewise, enthusiasts of swordsmanship have cherished classic Scottish fencing treatises by those such as William Hope and Donald McBane. However, up until now, a number of obscure Scottish treatises on the use of the sword have evaded the notice of authors, scholars and researchers. Presented here are five such texts, now published again for the first time in more than two centuries. They include:

I. Examination & Vindication of the Highlander's Manner of Attacking and Fighting the Enemy in a Day of Action. -- Though not a fencing text, this is an unique early eighteenth century manuscript on battlefield techniques that has never before been published, and is now presented here with the permission of the Royal Library at Windsor Castle. Authored by an anonymous Highland veteran, it includes a spirited defense of the native manner of fighting, and provides new insight into the use of the targe during the period of the great Jacobite conflicts.

II. The Sword's-Man; Containing a Series of Observations on the Use of the Sword. -- This treatise, authored in 1788 by Edinburgh fencing instructor John Ferdinand, contains instruction in the use of the most popular side-arms of the period: the broadsword, small-sword, and spadroon.

III. A Dictionary, Explaining the Terms, Guards, and Positions, Used in the Art of the Small Sword. -- This useful and interesting glossary on the art of fencing is embedded with numerous instructions, and was written by Hary Fergusson, a native of Aberdeenshire who taught fencing in Edinburgh and North America during the 1760s and 1770s.

IV. A Treatise on the New Sword Exercise. -- This treatise on the use of the cavalry saber was first published in 1797, shortly after the widespread adoption of the 1796 pattern cavalry sword. Its author was Sholto Douglas Sorlie, a native of Edinburgh, Sergeant in the 7th Queen's Own Light Dragoons, and later a veteran of Salamanca, Vittoria, Pyrennees, Navelle, Orthes, and the Peninsular War.

V. This final chapter explores the life and career of Donald McAlpine, a soldier from Inverness and officer in the famed Queens Rangers (an early Special Operations unit), who taught the use of the back-sword in Boston during the American War of Independence. His student sketched what is currently the earliest known illustration of fencing technique in the American colonies. The full, original page containing the illustration of McAlpine's instruction is faithfully reproduced herein for the first time ever.