A Step Away from Paradise: The True Story of a Tibetan Lama's Journey to a Land of Immortality (Paperback) 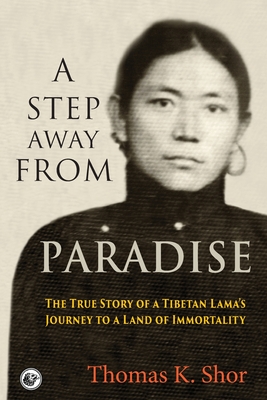 A Step Away from Paradise: The True Story of a Tibetan Lama's Journey to a Land of Immortality (Paperback)

IT WAS THE EARLY 1960s. The place, a far-off corner of the Himalayas long fabled in Tibetan tradition to be hiding a valley of immortality among its peaks and glaciers-a real-life Shangri-La. They waited generations for the prophesied lama to come, the one with the secret knowledge of how to 'open' the Hidden Land. Then, one day, he came. His name was Tulshuk Lingpa.

THIS BOOK TELLS THE TRUE STORY of this charismatic visionary lama and his remarkable expedition. Against the wishes of the kings of both Sikkim and Nepal, he and over three hundred followers ventured up the snowy slopes of the third highest mountain of the planet. Their aim: to open a crack in the very fabric of reality and go to a land we would all wish to inhabit if it were only there-a land of peace and concord.

FORTY YEARS LATER, the author spends over five years tracking down the surviving members of this extraordinary expedition. He deftly weaves their stories together with humor, wisdom, and scholarly research into Tibetan traditions of Hidden Lands, all the while reflecting on what this means for the rest of us.

"Like no other book I have ever read...a riveting tale of adventure...honest to the real spirit of Tibet...both unique and intriguing...an engrossing read. Highly recommended."

Jetsunma Tenzin Palmo, from the Foreword

"Don't listen to anybody. Decide by yourself and practice madness. Develop courage for the benefit of all sentient beings. Then you will automatically be free from the knot of attachment. Then you will continually have the confidence of fearlessness and you can then try to open the Great Door of the Hidden Place."

WHAT WOULD HAVE HAPPENED...

If Lewis Carroll had proclaimed the Reality of Alice's Wonderland?

What if he had gathered a Following & launched an Expedition?

THIS EDITION IS NOT FOR SALE IN SOUTH ASIA, MALAYSIA, OR SINGAPORE

Writer and photographer Thomas K. Shor was born in Boston, USA, and studied comparative religion and literature in Vermont. With an ear for unusual stories, the fortune to attract them, and an eye for detail, he has travelled the planet's mountainous realms-from the Mayan Highlands of southern Mexico in the midst of insurrection to the mountains of Greece, and more recently, to the Indian Himalayas-to collect, illustrate, and write stories with a uniquely personal character, often having the flavour of fable. Shor has lectured widely on his writings and has had solo exhibits of his photographs in Europe and India. He can often be found in the most obscure locales, immersed in a compelling story touching upon fundamental human themes. www.ThomasShor.com