Atheism Destroys: How Godlessness Destroys the Pillars of Civilization—and How to Fight Back (Atheism Kills #2) (Paperback) 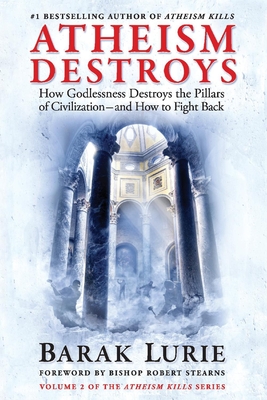 Atheism Destroys: How Godlessness Destroys the Pillars of Civilization—and How to Fight Back (Atheism Kills #2) (Paperback)


Not On Our Shelves—Ships in 1-5 Days
Atheism Destroys is the second installment of Barak Lurie's Atheism Kills series. Whereas Atheism Kills focused primarily on how a world without God has led to horrific mass killings and other brutalities, Atheism Destroys focuses on how godlessness destroys our most treasured institutions and values: free speech, family, relationships, and even courage. Lurie shows how godlessness has been the primary destroyer of many of our liberties. He also shows how godlessness is the root of and primary force enabling drug cartels, the mafia, sex-trafficking, and psychopaths.

With insight, stories, and humor, Lurie treats atheism as a destructive force in and of itself —one which we dare not tread lightly and which we must resist like any other enemy at the gate. Godlessness weakens us both individually and as a society, enabling evil to penetrate more easily.

While many atheists proclaim atheism is merely a non-belief in God, Lurie shows that atheism is in fact an ideology which leads to disastrous consequences — much like not believing in gravity, not enforcing laws, or not driving on the right side of the road.

Lurie demonstrates that we have no choice but to fight godlessness, and to recognize that without God, we lose all that we value in civilization. Indeed, without God, civilization as we know it will collapse.

From all this, Lurie delivers great news: We have the answer. With God in our lives, we can guard against and ultimately defeat virtually all of our modern-day social ills — from mass shootings to sexual abuse to the breakdown of the family. He shows how easy it is to do this in our own individual lives, and as a society. Only with God can we shore up our house against all destroyers — from outside and from within.
Barak Lurie is a managing partner of the law firm Lurie & Kramer in Los Angeles, California. Barak obtained his BA with honors at Stanford University in 1985, and his JD and MBA at the UCLA School of Law and Anderson School of Business in 1989. He is the host of The Barak Lurie Show, a popular and riveting radio program heard Sunday mornings on AM870/KRLA in Los Angeles.

Barak is a passionate advocate for a Judeo-Christian civilization. Born in Israel, he serves on many pro-Christian and pro-Israel boards, most notably Stand With Us and PragerU. Barak's radio show, articles, podcasts, speeches and social media presence have impacted scores of people around the world. He's also an avid mountain biker and vegan aficionado. He and his wife Stacey live with their three children in Los Angeles, California. Bishop Robert Sterns