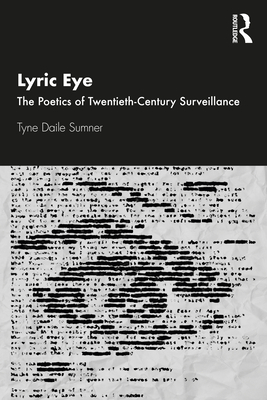 Lyric Eye: The Poetics of Twentieth-Century Surveillance presents the first detailed study of the relationship between poetry and surveillance. It critically examines the close connection between American lyric poetry and a burgeoning US state surveillance apparatus from 1920 to the 1960s. The book explores the myriad ways that poets-Ezra Pound, William Carlos Williams, W.H. Auden, Langston Hughes, James Baldwin, Sylvia Plath, Gertrude Stein, Robert Lowell, Allen Ginsberg and others-explored a developing and fraught environment in which the growing power of American investigative agencies, such as the FBI under J. Edgar Hoover, imposed new pressures on cultural discourse and personal identity. In analysing twentieth-century American poetry and its various ideas about "the self," Lyric Eye demonstrates the extent to which poetry and surveillance employ similar styles of information-gathering such as observation, overhearing, imitation, abstraction, repurposing of language, subversion, fragmentation and symbolism.

Ground-breaking and prescient, this book will be of great interest to scholars and researchers of literature, politics, surveillance and intelligence studies, and digital humanities.

Tyne Daile Sumner is a researcher and teacher at the University of Melbourne, Australia. Her work explores the relationship between literature and surveillance, with a focus on the ways that poetry is engaged with concepts such as privacy, identity, confession and subjectivity in the context of digital technology and the increasing datafication of everyday life.