The Routledge Handbook to Music Under German Occupation, 1938-1945: Propaganda, Myth and Reality (Paperback) 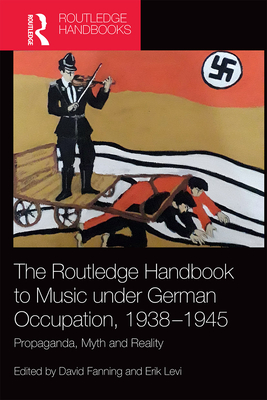 The Routledge Handbook to Music Under German Occupation, 1938-1945: Propaganda, Myth and Reality (Paperback)

Following their entry into Austria and the Sudetenland in the late 1930s, the Germans attempted to impose a policy of cultural imperialism on the countries they went on to occupy during World War II. Almost all music institutions in the occupied lands came under direct German control or were subject to severe scrutiny and censorship, the prime objective being to change the musical fabric of these nations and force them to submit to the strictures of Nazi ideology.

This pioneering collection of essays is the first in the English language to look in more detail at the musical consequences of German occupation during a dark period in European history. It embraces a wide range of issues, presenting case studies involving musical activity in a number of occupied European cities, as well as in countries that were part of the Axis or had established close diplomatic relations with Germany. The wartime careers and creative outputs of individual musicians who were faced with the dilemma of either complying with or resisting the impositions of the occupiers are explored. In addition, there is some reflection on the post-war implications of German occupation for the musical environment in Europe.

Music under German Occupation is written for all music-lovers, students, professionals and academics who have particular interests in 20th-century music and/or the vicissitudes of European cultural life during World War II.

David Fanning is Professor of Music at the University of Manchester and author and editor of books, articles and critical editions on Nielsen, Shostakovich, Weinberg, Expressionism and the 20th-century symphonic tradition. An experienced chamber music pianist and accompanist, he is also active as a critic for Gramophone and the Daily Telegraph. Erik Levi is Visiting Professor of Music at Royal Holloway, University of London. He is author and editor of several books relating to music during the Weimar Republic and the Third Reich and is active as a broadcaster and critic for BBC Music Magazine. Amongst his recent publications are Music and Displacement, co-edited with Florian Scheding (2010); Mozart and the Nazis (2010); The Impact of Nazism on Twentieth-Century Music (2014); and Hanns Eisler and England (2014).