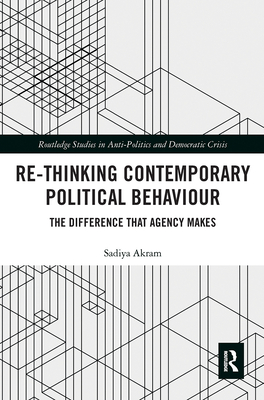 Proposing a novel approach to understanding the contemporary political landscape, Akram draws on the work of Pierre Bourdieu and Margaret Archer on agency and argues the need for an in-depth engagement with concepts of agency to improve the reach and scope of political analysis.

Is the way that people engage with politics changing? If so, how well-equipped are we to document and explain the extent and range of the ways in which people are engaging in politics today? This book tackles these questions through a blend of theoretical reflection and empirical research, shedding new light on the relationship between arena and process definitions of politics, and how the social relates to the political. Hitherto unexplored features of agency such as the unconscious and the internal political conversation are shown to be critical in exploring how people mobilise today and how they make sense of their political engagement. Two in-depth case studies of the internal political conversations that individuals hold as well as an analysis of the 2011 UK riots are presented.

Making a case for the role of self-expression in politics, this book will be of use for graduates and scholars interested in British politics, political theory, social theory, political sociology, the theory and practice of political engagement and political behaviour.