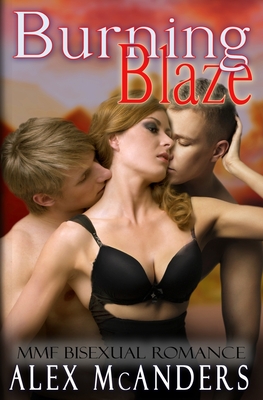 An ex-football player billionaire, his genius best friend, and the curvy woman who hates them both, stumble into a sizzling MMF romance. Fake relationships, a football player's first time gay experience, and heart-thumping passion follow.

Blaze has a problem, he's cocky and he likes to put on a show. When he was a professional football player, it made him a star. But now that he's the CEO of a billion dollar biotech company, it can get him into trouble. And when a video goes viral of him "putting on a show" with a pair of Swedish twins, the only one who stands up for him is Ariel Katt, a rival CEO who in a press conference proclaims that she will stand by her fianc .

Fianc ? They can barely stand each other. What is Ariel up to? And, does Blaze have any choice but to agree to Ariel's crazy proposal?

Ariel came from nothing and is now the CEO her own biotech company. She's driven and knows how to get what she wants. But after a string of bad investments, she is in desperate need of a hit. She needs Quin Summers' latest invention which is guaranteed to change the world. That means Quin has to be convinced to join her company. And who better to convince him than Quin's longtime best friend, who also happens to be her hated-rival, and the guy who is about to owe her big time.

There are two things that are undeniably true about Quin Summers; he is a brilliant genius, and he hates Blaze Turner. He and Blaze had been friends since Blaze was the popular high school football player and Quin was his shy, nerdy tutor. But after they went into business together as adults, Blaze used Quin for his genius, stole Quin's patent, made billions from it, and left Quin with nothing. What made it worse was that Quin had been secretly in love with him.

But now that Quin has invented something that is guaranteed to change the world, he knows that Blaze will come calling. When he does, Quin will enact his revenge... that is if his long suppressed feelings for him doesn't resurface. And since just looking at Blaze makes Quin weak in the knees, Quin knows that he's in for a rough ride.

'Burning Blaze' is a steamy bisexual romance with as many laughs as twists and turns. Loaded with enough MM, MFM, and MMF scenes to make your toes curl, it will leave you satisfied with its not-to-be-missed HEA ending.