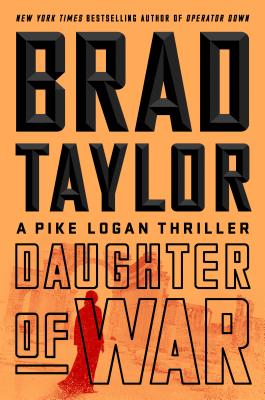 This is book number 13 in the A Pike Logan Thriller series.

Former Special Forces Officer and New York Times bestselling author Brad Taylor delivers a heart-pounding thriller featuring Taskforce operators Pike Logan and Jennifer Cahill as they come face to face with a conspiracy where nothing is as it seems.

Hot on the trail of a North Korean looking to sell sensitive US intelligence to the Syrian regime, Pike Logan and the Taskforce stumble upon something much graver: the sale of a lethal substance called Red Mercury.

Unbeknownst to the Taskforce, the Syrians plan to use the weapon of mass destruction against American and Kurdish forces, and blame the attack on terrorists, causing western nations to reassess their participation in the murky cauldron of the Syrian civil war.

Meanwhile, North Korea has its own devastating agenda: a double-cross that will dwarf the attack in Syria even as it lays the blame on the Syrian government. Leveraging Switzerland's fame for secrecy and its vast network of military bunkers, now repurposed by private investors for the clandestine storage of wealth, North Korea will use Red Mercury to devastate the West's ability to deliver further sanctions against the rogue regime.

As the Taskforce begins to unravel the plot, a young refugee unwittingly holds the key to the conspiracy. Hunted across Europe for reasons she cannot fathom, she is the one person who can stop the attack--if she can live long enough for Pike and Jennifer to find her.
BRAD TAYLOR is the author of the New York Times bestselling Pike Logan series. He served for more than twenty years in the U.S. Army, including eight years in 1st Special Forces Operational Detachment-Delta, commonly known as Delta Force. He retired as a Special Forces lieutenant colonel and now lives in Charleston, South Carolina.
Praise for Daughter of War

“Mesmerizing...[Taylor] adds his trademark rapid-fire pace and action scenes that rival the best of Brad Thor and Vince Flynn. A must-read for all hardcore thriller fans.”
—Providence Journal

“Taylor has already established himself as a master of special-ops thrillers, and this one will only add to his stellar reputation…Taylor adds human depth to his usually plot-driven novels, and the result is one of his best books to date.”
—Booklist (starred review)

"Taylor clearly has the qualifications to provide a military thriller with realistic details, and he does just that in this latest addition to the Pike Logan series....a fast-paced thriller. A believable story with the kind of interesting details that keep the pages turning.”
—Kirkus Reviews

“[A] page-turning thriller...Taylor is one of today’s premiere authors writing about the world of special ops.”
—Associated Press

“Brad Taylor’s Pike Logan thrillers just keep getting better, and Operator Down is his most ambitious and fully realized yet....Taylor continues to stand with Brad Thor and James Rollins at the top of the action-thriller genre. But Operator Down features the polished echoes of Daniel Silva and even John le Carré, a thriller that’s at once both cerebral and muscular, a rare combination that Taylor pulls off with skill and aplomb.”
—Providence Journal

“Former Delta Force officer Taylor relies on his familiarity with modern combat logistics to create credible characters and complex plots that pulse with intense intrigue, authenticity, and realism. Fans of military thrillers will enjoy how this narrative mirrors current events in the worldwide war on terror.”
—Library Journal

“As usual in the Pike Logan series, the spycraft and related technology are fascinating, the dialogue crackles, and all the players are operating in an international sea of moral ambiguity. Recommend Pike Logan to readers who like their spies tough, smart, and bordering on superhuman.”
—Booklist

“Brad Taylor continues to tackle one of the pressing fears of today—terrorism. The plots and the characters are fictional but Taylor's meticulous research brings that sense of chilling believability to his Pike Logan thrillers....Taylor delivers a high-energy thriller in Ring of Fire.”
—Oline Cogdill, South Florida Sun-Sentinel

“Fresh plot, great action, and Taylor clearly knows what he is writing about....When it comes to tactics and hardware, he is spot-on.”
—Vince Flynn, #1 New York Times bestselling author