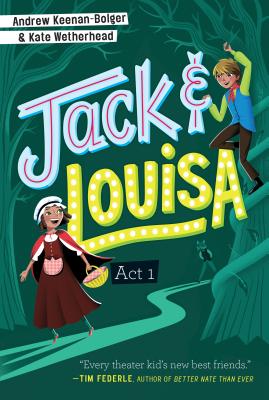 This is book number 1 in the Jack & Louisa series.

Twelve-year-old Jack Goodrich was a Broadway star, with two shows under his belt and a third in rehearsals. But when his voice suddenly changes, Jack and his parents leave the spotlight and move far from New York City to Shaker Heights, Ohio. While Jack hopes to leave his Broadway past behind, his new neighbor refuses to let him off the hook. Louisa is a self-proclaimed "musical theater nerd" and can hardly believe when an actor moves to town. What's more, the local theater has announced auditions for her favorite show, Into the Woods. As the audition date looms nearer, the two are faced with difficult choices. Should Jack risk humiliation and return to the stage? Will Louisa have confidence to go it alone? And can friendship survive all those complicated octave leaps?
Andrew Keenan-Bolger is a musical theater actor and singer originally from Detroit. He has appeared on Broadway in Tuck Everlasting, Newsies, Mary Poppins, and Seussical. Andrew and Kate Wetherhead created the popular web series, "Submissions Only," which was hailed as one of Entertainment Weekly's "Top 10 Things We Love."

Kate Wetherhead originated the role of Chutney in  Legally Blonde: The Musical and is a fixture on the New York stage. She has performed extensively Off-Broadway and regionally, and was in the Broadway production of The 25th Annual Putnam County Spelling Bee.
"Theater fans will eat this up."
- Kirkus Reviews

"A sweet series opener... sure to please any young MTN."
- Publishers Weekly

"The friendship that develops between Jack & Lou isn't just about Musical Theater Nerds (or MTNs) but finding each other. This is a loving, funny and sweet book. Can't wait for the next one."
- Tony Award winner Kristin Chenoweth

"Funny, fabulous, and most of all true, Jack & Louisa are every theater kid's new best friends."
- Tim Federle, author of Better Nate Than Ever