Humanists and Bookbinders: The Origins and Diffusion of Humanistic Bookbinding, 1459-1559 (Paperback) 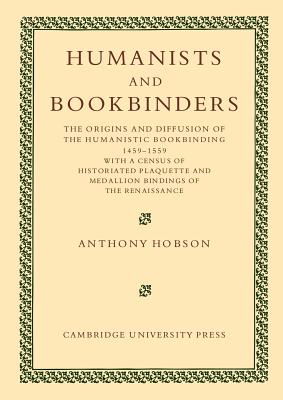 Humanists and Bookbinders: The Origins and Diffusion of Humanistic Bookbinding, 1459-1559 (Paperback)


Not On Our Shelves—Ships in 1-5 Days
(This book cannot be returned.)
When it was first published in 1990, this book was an important study (the first for over sixty years) of north Italian and Parisian bindings by a distinguished authority who has elegantly considered the twin claims of ornament and patronage. The decorative possibilities of book binding were transformed during the third quarter of the fifteenth century through the work of antiquaries and scribes centred in Padua. Gilt-tooled elements taken from Islamic bookbindings and metal work, antique monuments and inscriptions and classical gems were adapted to create a new style. Italian men of letters and collectors enthusiastic for the New Learning carried the Paduan fashion to Central and Northern Europe, and Francis I's respect for learning and the patronage of two successive kings kindled a final blaze of creative brilliance in sixteenth-century France.