The Writings of Robert Grosseteste, Bishop of Lincoln 1235-1253 (Paperback) 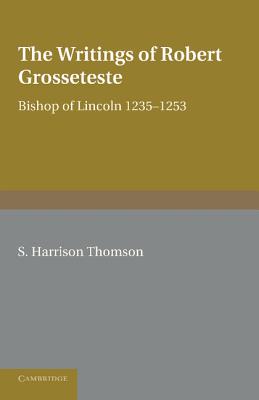 The Writings of Robert Grosseteste, Bishop of Lincoln 1235-1253 (Paperback)


Not On Our Shelves—Ships in 1-5 Days
(This book cannot be returned.)
Robert Grosseteste (c.1168-1253) was a theologian and philosopher who played a significant role in the development of early scientific thought; he held the position of Bishop of Lincoln from 1235 until his death. Originally published in 1940, this book constitutes an extensive bibliographical study of Grosseteste's works based upon original sources. Over 140 libraries were visited and approximately 2500 manuscripts consulted during the preparation of the text, with many manuscripts being examined without prior knowledge that they contained material by Grosseteste. A detailed introduction, indexes and photographic images of manuscripts are also included. This is a groundbreaking book that will be of value to anyone with an interest in Grosseteste and the development of medieval thought.