Farthest North: Being the Record of a Voyage of Exploration of the Ship Fram, 1893 96, and of a Fifteen Months' Sleigh Journey (Paperback) 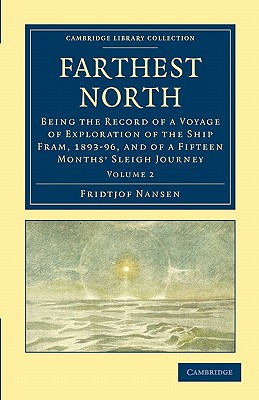 Farthest North: Being the Record of a Voyage of Exploration of the Ship Fram, 1893 96, and of a Fifteen Months' Sleigh Journey (Paperback)


Not On Our Shelves—Ships in 1-5 Days
(This book cannot be returned.)
Originally published in 1897, this two-volume work chronicles the polar expedition of Norwegian scientist Fridtjof Nansen (1861 1930), who came closer than any previous explorer to the North Pole. Beginning on board his boat, the Fram, which was deliberately driven into pack-ice off Siberia in order to drift north, Nansen and his companions later resorted to sleds and kayaks. Volume 2 describes the journey over the ice setting out with 28 dogs, 3 sledges and 2 kayaks and ends with an account of the return journey. (It also includes Captain Otto Sverdrup's report of the expedition.) The Fram served as a laboratory during its time in the Arctic, and Nansen eventually published six volumes of scientific observations. He later became Norwegian delegate to the League of Nations, directing humanitarian projects, and is famous for receiving the Nobel Peace Prize in 1922 as well as for his polar achievements.