Nineveh and Its Remains: With an Account of a Visit to the Chaldaean Christians of Kurdistan, and the Yezidis, or Devil-Worshippers (Paperback) 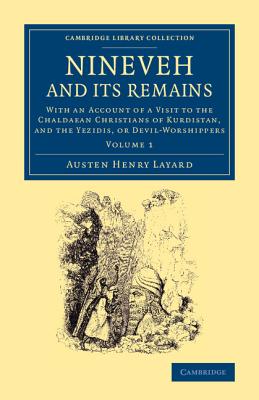 Nineveh and Its Remains: With an Account of a Visit to the Chaldaean Christians of Kurdistan, and the Yezidis, or Devil-Worshippers (Paperback)


Not On Our Shelves—Ships in 1-5 Days
(This book cannot be returned.)
Before abandoning archaeology for politics, Sir Austen Henry Layard (1817 94) carried out major excavations in Mesopotamia between 1845 and 1851, uncovering important evidence of ancient Assyrian civilisation. Although he originally believed that Nimrud was Nineveh, he later confirmed that Kuyunjik was the location of the ancient city. First published in 1849, this two-volume work is a mixture of excavation report, ancient history, anthropology and travel writing. Layard's excitement at the extent and importance of the finds as soon as digging commenced is clearly conveyed, and he places Mesopotamian history in the context of the more familiar biblical and classical worlds. His Discoveries in the Ruins of Nineveh and Babylon (1853) is also reissued in this series. Volume 1 covers the background to the excavations, the first discoveries, and the difficulties with Arab authorities and local workmen. Also included are observations on the inhabitants, culture and history of the region.