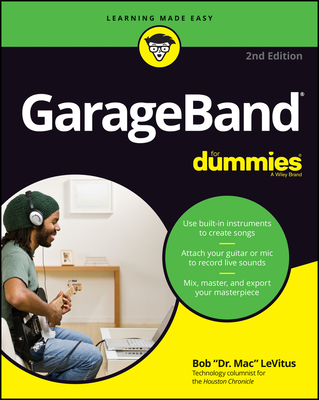 GarageBand has become the default musical sketchpad for well-known artists and hobbyists who want a simple way to make their own music. GarageBand For Dummies is your default guide to navigating the interface and making the tweaks to create your own songs. Look inside to discover how to lay down a beat with the virtual drum kits, layer on sweet sounds with built-in virtual instruments, and attach simple hardware to record vocals or live instruments on a Mac computer, iPad, or even an iPhone.

* Get GarageBand for your device
* Take a tour of the virtual studio
* Build a beat
* Layer on virtual instruments
* Simple hardware for recording live sounds
* Adding effects and making edits
* Outputting a final master.
Bob "Dr. Mac" LeVitus has been the technology columnist for the Houston Chronicle for more than two decades and a columnist for the Mac Observer for almost as long. A prolific writer, he is the author or coauthor of nearly 90 books, including multiple editions of macOS For Dummies and iPad For Dummies. Bob also has worked as a commercial music producer.