Acting, Archetype, and Neuroscience: Superscenes for Rehearsal and Performance (Hardcover) 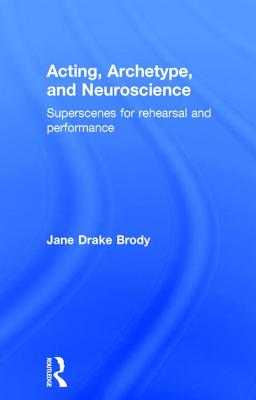 Acting, Archetype, and Neuroscience: Superscenes for Rehearsal and Performance (Hardcover)

"How do we move actors into the less accessible regions of themselves and release hotter, more dangerous, and less literal means of approaching a role?"

Superscenes are a revolutionary new mode of teaching and rehearsal, allowing the actor to discover and utilize the primal energies underlying dramatic texts. In Acting, Archetype, and Neuroscience Jane Drake Brody draws upon a lifetime's experience in the theatre, alongside the best insights into pedagogical practice in the field, the work of philosophers and writers who have focused on myth and archetype, and the latest insights of neuroscience.

Mine the essentials of accepted acting theory while finding ways to access more primally-based human behavior in actors Restore a focus on storytelling that has been lost in the rush to create complex characters with arresting physical and vocal lives Uncover the mythical bones buried within every piece of dramatic writing; the skeletal framework upon which hangs the language and drama of the play itself Focus on the actor's body as the only place where the conflict inherent in drama can be animated.

Acting, Archetype, and Neuroscience weaves together a wealth of seemingly disparate performance methods, exciting actors to imaginatively and playfully take risks they might otherwise avoid. A radical new mixture of theory and practice by a highly respected teacher of acting, this volume is a must-read for students and performance practitioners alike.

Jane Drake Brody teaches graduate and undergraduate Acting at The Theatre School at DePaul University, following a long career as an actress, director, professional acting coach and casting director. Her many film and TV casting credits include the Oscar winning Fargo, for which she received the Casting Society of America's Best Location Casting Award.