The Politicisation of Migration (Routledge Studies in Extremism and Democracy) (Paperback) 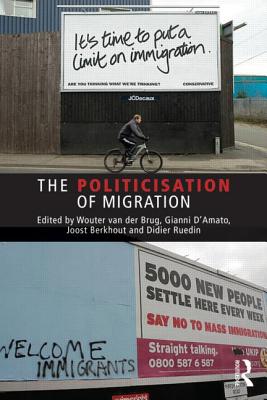 The Politicisation of Migration (Routledge Studies in Extremism and Democracy) (Paperback)

Why are migration policies sometimes heavily contested and high on the political agenda? And why do they, at other moments and in other countries, hardly lead to much public debate? The entrance and settlement of migrants in Western Europe has prompted various political reactions. In some countries anti-immigration parties have gained substantial public support while in others migration policies have been hardly controversial.

The Politicisation of Migration examines the differences between seven Western European countries by developing a conceptual framework to empirically explain patterns of politicisation and de-politicisation. The analyses show that over the past decade immigration has been increasingly defined in socio-cultural terms and that it has been receiving less political attention since the economic crisis started in 2007. This book also looks at the role of mainstream parties and political actors in the process of politicisation, and demonstrates how the role of 'challengers' is more limited than often assumed.

Contributing to literatures on migration, party politics and agenda-setting, the book will be of interest to students and scholars in the fields of politics and migration studies.