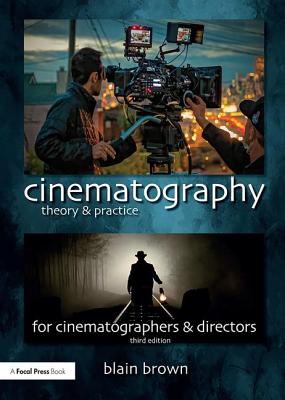 The world of cinematography has changed more in the last few years than it has since it has in 1929, when sound recording was introduced. New technology, new tools and new methods have revolutionized the art and craft of telling stories visually. While some aspects of visual language, lighting and color are eternal, shooting methods, workflow and cameras have changed radically. Even experienced film artists have a need to update and review new methods and equipment. These change affect not only the director of photography but also the director, the camera assistants, gaffers, and digital imaging technicians.

Cinematography: Theory and Practice covers both the artistry and craftsmanship of cinematography and visual storytelling. Few art forms are as tied to their tools and technology as is cinematography. Take your mastery of these new tools, techniques, and roles to the next level with this cutting-edge roadmap from author and filmmaker Blain Brown.

Whether you are a student of filmmaking, just breaking into the business, currently working in the industry and looking to move up to the next level, or an experienced professional who wants to update their knowledge of tools and techniques, this book provides both a basic introduction to these issues as well as more advanced and in-depth coverage of the subject.

Visual language Visual storytelling Continuity and coverage Cameras and digital sensors Exposure techniques for film and video Color in-depth Understanding digital images Waveform monitors, vectorscopes, and test charts Using linear, gamma, and log encoded video Image control and grading on the set The tools and basics of film lighting ASC-CDL, ACES and other new methods Optics and focus Camera movement Set operations Green screen, high speed and other topics
Blain Brown was educated at C.W. Post College; M.I.T. and Harvard Graduate School of Design. He began in New York as a commercial still photographer before starting in the film business. After working as a gaffer, be became a cinematographer doing primarily commercials and music videos. After completing his first feature film, he moved to Los Angeles where he has been Director of Photography on 14 feature films as well as national commercials, promotional films, industrials, music videos and documentaries. He has worked in many states in the U.S. as well as Mexico, Canada, India, Italy, France, the Philippines and Jordan. His experience includes 35mm and 16mm projects, as well as 24P High Def, DigiBeta, BetaSP and DV. He has completed projects as a director, editor and screenwriter; with three screenplays produced. He has also taught courses in storytelling and visual communication. As a Director of Photography specializing in features and commercials, he is now based in Los Angeles. His books include A Sense of Place; Motion Picture and Video Lighting and The Filmmaker's Pocket Reference. His work can be seen at www.BlainBrown.com.