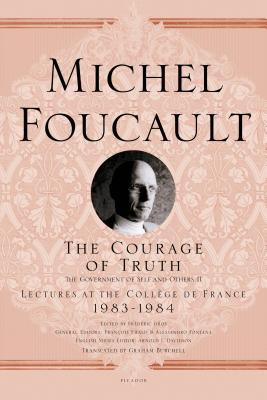 The Courage of the Truth is the last course that Michel Foucault delivered in a series of lectures from 1970 to 1984 at the Collège de France.

Here, Foucault continues the theme of the previous year's lectures in exploring the notion of "truth-telling" in politics to establish a number of ethically irreducible conditions based on courage and conviction. His death, on June 25th, 1984, tempts us to detect the philosophical testament in these lectures, especially in view of the prominence they give to the themes of life and death.

“[Foucault] has an alert and sensitive mind that can ignore the familiar surfaces of established intellectual codes and ask new questions . . . [He] gives dramatic quality to the movement of culture.” —The New York Review of Books

“Foucault is quite central to our sense of where we are.” —The Nation

“These lectures offer important insights into the evolution of the primary focus of Foucault's later work--the relationship between power and knowledge.” —Library Journal

“Ideas spark off nearly every page . . . The words may have been spoken in [the 1970s], but they seem as alive and relevant as if they had been written yesterday.” —Bookforum