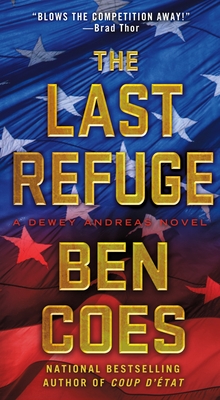 This is book number 3 in the A Dewey Andreas Novel series.

Israeli Special Forces commander Kohl Meir has proof that Iran has finally succeeded in building its first nuclear weapon—and plans on using it to attack Israel. But before Meir can recruit Dewey Andreas and execute his secret operation, he's abducted in New York and smuggled into Iran, where he's imprisoned and tortured.

Dewey owes his life to Meir and his team of Israeli commandos. Now he must do whatever it takes to free Meir from one of the world's most secure prisons…while Iran's nuclear clock ticks away. It's the most perilous mission of his lifetime—and Dewey cannot afford to fail. The fate of millions is at stake. The fragile balance of world power depends on his every move. And time is running out…

“My favorite novel in at least a decade. The writing was inherently masculine, brilliantly crafted.” —Elizabeth Backney, Huffington Post

“The Last Refuge is a winner, and it will keep readers turning the pages.” —The Associated Press

“Another winner from a writer who is a rising star among the ranks of the literary world's most successful authors of the international thriller.” —The Nashua Telegraph

“It's a thriller. It's current, and the excitement keeps going…” —The Daily Oklahoman