Odds Against Tomorrow: A Novel (Paperback) 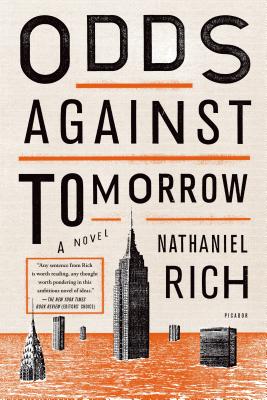 Odds Against Tomorrow: A Novel (Paperback)

New York City, the near future: Mitchell Zukor works on the cutting edge of corporate irresponsibility, and business is booming. A brilliant mathematician, he spends his days calculating worst-case scenarios for FutureWorld, a consulting firm that indemnifies corporations against potential disasters. As Mitchell immerses himself in the calculus of catastrophe, he exchanges letters with Elsa Bruner—a college crush with her own apocalyptic secret—and becomes obsessed by a culture's fears. When Mitchell's darkest predictions come true and an actual worst-case scenario engulfs Manhattan, he realizes that he is uniquely prepared to profit. But what will it cost him?

Odds Against Tomorrow, hailed by Rolling Stone as "the first great climate-change novel," is an all-too-plausible literary thriller, an unexpected love story, and a philosophically searching inquiry into the nature of fear. The future is not what it used to be.

Nathaniel Rich is the author of the novels King Zeno, Odds Against Tomorrow, and The Mayor’s Tongue. He is a writer at large for The New York Times Magazine and a regular contributor to The Atlantic and The New York Review of Books. He lives in New Orleans.

“Any sentence from Rich is worth reading, any thought worth pondering in this ambitious novel of ideas.” —The New York Times Book Review (Editors' Choice)

“An irresistible literary thriller...Rich mines the terror of our times.” —Rolling Stone

“The opposite of disaster, a knockout of a book by a young writer to keep your eye on from now on...As terrifically described as any of the best science fiction we have.” —Alan Cheuse, NPR's All Things Considered

“Rich's descriptions of the vagaries of both nature and human nature are stark, fresh, and convincing, full of surprise and recognition as both good comedy and good terror must be.” —Cathleen Schine, The New York Review of Books

“An author who could well become one of the defining writers of his generation.” —The Sunday Telegraph on The Mayor's Tongue

“A spare masterpiece.” —The Boston Globe on The Mayor's Tongue