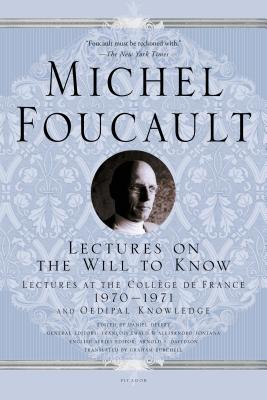 
Not On Our Shelves—Ships in 1-5 Days
Lectures on the Will to Know reminds us that Michel Foucault's work only ever had one object: truth. Here, he builds on his earlier work, Discipline and Punish, to explore the relationship between tragedy, conflict, and truth-telling. He also explores the different forms of truth-telling, and their relation to power and the law. The publication of Lectures on the Will to Know marks a milestone in Foucault's reception, and it will no longer be possible to read him in the same way as before.

“Foucault must be reckoned with.” —The New York Times Book Review

“Foucault has an alert and sensitive mind that can ignore the familiar surfaces of established intellectual codes and ask new questions . . . He gives dramatic quality to the movement of culture.” —The New York Review of Books

“Foucault is quite central to our sense of where we are . . . [His work carries] out, in the noblest way, the promiscuous aim of true culture.” —The Nation

“Ideas spark off nearly every page…The words may have been spoken in [the 1970s] but they seem as alive and relevant as if they had been written yesterday.” —Bookforum