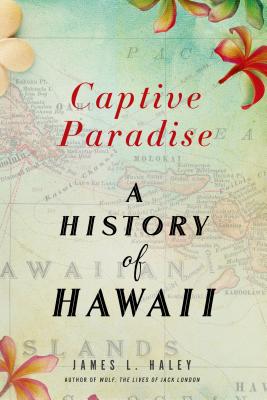 The most recent state to join the union, Hawaii is the only one to have once been a royal kingdom. After its "discovery" by Captain Cook in the late 18th Century, Hawaii was fought over by European powers determined to take advantage of its position as the crossroads of the Pacific. The arrival of the first missionaries marked the beginning of the struggle between a native culture with its ancient gods, sexual libertinism and rites of human sacrifice, and the rigid values of the Calvinists. While Hawaii's royal rulers adopted Christianity, they also fought to preserve their ancient ways. But the success of the ruthless American sugar barons sealed their fate and in 1893, the American Marines overthrew Lili'uokalani, the last queen of Hawaii.

James L. Haley's Captive Paradise is the story of King Kamehameha I, The Conqueror, who unified the islands through terror and bloodshed, but whose dynasty succumbed to inbreeding; of Gilded Age tycoons like Claus Spreckels who brilliantly outmaneuvered his competitors; of firebrand Lorrin Thurston, who was determined that Hawaii be ruled by whites; of President McKinley, who presided over the eventual annexation of the islands. Not for decades has there been such a vibrant and compelling portrait of an extraordinary place and its people.

JAMES L. HALEY is a critically acclaimed historian and biographer. His books have been praised by Publishers Weekly who called Passionate Nation: An Epic History of Texas "Outstanding." USA Today called his book Wolf: The Lives of Jack London "fascinating," and The Wall Street Journal said that Haley "surpasses Irving Stone."

“In this single hefty volume... Haley tells the quarter-millennium story of Hawaii's recent progress... This book presents a potent reminder of the crucial significance of Hawaii... "Captive Paradise" begins with a memorably fine account of the murderous moments leading up to Captain Cook's death at Kealakekua Bay on the Big Island in 1779.” —Wall Street Journal

“[A] compelling warts-and-all history of Hawaii's era of independence...James L. Haley explores it with commendable nuance and respect for native Hawaiians as active agents in the shaping of their country's destiny.” —The Daily Beast

“A pertinent work of keen understanding of the complex Hawaiian story.” —Kirkus

“[An] excellent survey of Hawaii's history...This is a revealing and balanced view” —Booklist

“A haunting tale... Brimming with phrases in the Hawaiian language, this meticulously researched account contains everything from local folklore to biographies of pre-statehood rulers...essential for readers interested in American history or politics” —Library Journal

“Haley's story goes beyond surfboards and orchids; it is a dramatic history of the U.S.'s most recent and complex state.” —Shelf-Awareness

“Haley's narrative is certainly satisfying. In addition to the rich detail about the culture and the three-dimensional portraits of historical figures, the pace is quick and conveys the rapidity with which Hawaii became a powerful part of the Pacific.” —The Roanoke Times

“Totally engaging, slightly off-kilter narrative ... enlivened by Haley's very effective character sketching ... and his readings of these characters are almost always refreshing. ... worth reading even by the wary.” —Open Letters Monthly

“[Haley's] excellent exploration of the legendary figures of Hawaiian culture avoids the revisionist tendency to 'rhapsodize over the natives' lost innocence' and 'gloss over the horrors of precontact life... This balanced perspective is certainly welcome in the canon of Hawaiian history... this is an otherwise eye-opening study of Hawaii before it became a modern tourism capital--the Hawaii which continues to fascinate Westerners today.” —Publishers Weekly