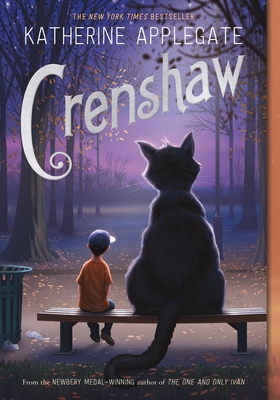 In her first novel since The One and Only Ivan, winner of the Newbery Medal, Katherine Applegate delivers an unforgettable and magical story about family, friendship, and resilience.

Jackson and his family have fallen on hard times. There's no more money for rent. And not much for food, either. His parents, his little sister, and their dog may have to live in their minivan. Again.

Crenshaw is a cat. He's large, he's outspoken, and he's imaginary. He has come back into Jackson's life to help him. But is an imaginary friend enough to save this family from losing everything?

Katherine Applegate is the author of several best-selling young adult series, including Animorphs and Roscoe Riley Rules. Home of the Brave, her first standalone novel, received the SCBWI 2008 Golden Kite Award for Best Fiction and the Bank Street 2008 Josette Frank Award. She lives with her family in Irvine, California.

“The tone is warm and, occasionally, quirkily funny, but it doesn't sugarcoat the effects of hunger and vulnerability. This novel adds a middle-grade perspective to the literature of imaginary friends and paints a convincing and compassionate portrait of a social class—the working poor—underrepresented in children's books.” —The Horn Book, starred review

"This accessible and moving novel demonstrates how the creative resilience of a child’s mind can soften difficult situations, while exploring the intersection of imagination and truth." —Publishers Weekly, starred review

"...a quick read that encourages people of all ages to be honest with one another and value family and friends (real and imaginary!)" —Booklist