If You're In My Office, It's Already Too Late: A Divorce Lawyer's Guide to Staying Together (Hardcover) 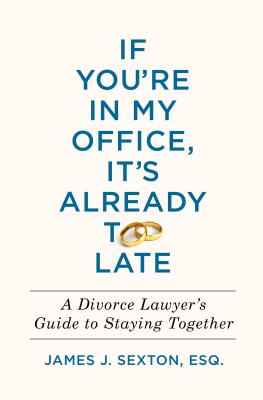 If You're In My Office, It's Already Too Late: A Divorce Lawyer's Guide to Staying Together (Hardcover)

Hard-hitting divorce lawyer James Sexton shares his insights and wisdom from the front lines of divorce to keep you out of his office and improve your relationship.

If You're in My Office, It's Already Too Late. James Sexton knows this. After dealing with more than a thousand clients whose marriages have dissolved over everything from an ill-advised threesome with the nanny to the uneven division of carpool duties, he also knows all of the what-not-to-dos for couples who want to build—and consistently work to preserve—a lasting, fulfilling relationship. Described by former clients as a “courtroom gunslinger” and “the sociopath you want on your side,” Sexton tells the unvarnished truth about relationships, diving straight into the most common marital problems. These usually derive from dishonest—or nonexistent—communication. Even when the alleged reason for separation is one spouse’s new “personal trainer,” there’s likely a communication problem that predates the fitness kick. Symptom and root cause get confused all the time.

Sexton has spent his career working with spouses-to-be-no-longer. Reverse engineering a relationship can help to identify and fix what does not work. Ever feel like you’re holding back criticism of your spouse because you just can’t have that fight right now? Sexton will tell you to “Hit Send Now.” Maybe you aren’t as adventurous as you used to be, or need some "you time," but for some reason it seems weird or exhausting to change up the routine now. Sexton knows where that mentality leads and offers viable alternative paths to take. Though he deals constantly with the heartbreak of others, he still believes in romance and the transformative power of love. This book is his opportunity to use what he has learned to help couples that aren’t so far gone get back on track.

James J. Sexton is a trial lawyer with two decades of experience negotiating and litigating high-conflict divorces. He wakes up every day at 4 a.m. to return emails and plot his next moves in the chess match of matrimonial law, while somehow still maintaining faith in humanity and love. In his limited free time, he trains and competes in mixed martial arts and Brazilian jiu-jitsu. He lives in Manhattan.

James is the author of If You're In My Office, It's Already Too Late.

"Who would have guessed that the person who gives the best advice about marriage was the guy responsible for getting you out of yours?" —Judith Newman, The New York Times Book Review

“Nobody knows the dark side of marriage like a divorce lawyer, and James Sexton is a good one. In this engaging, wry, and illuminating book, Sexton shares his legal war stories and dispenses some no-nonsense relationship advice for anybody thinking about getting married or hoping to stay that way. It’s an entertaining dose of tough love from a man who knows what he’s talking about." —Tom Perrotta, author of Little Children and Mrs. Fletcher

“Divorce is common, obviously, but how many people make the logical projection that seeds of thousands of future divorces are being planted and nurtured right now? How many couples recognize themselves as the misery farmers? While there's still time to stop themselves? James J. Sexton has a useful vantage point, blunt advice and enough grisly stories to make self-help entertaining—unless, I suppose, the marriage he's describing is yours.” —Carolyn Hax, nationally syndicated advice columnist for The Washington Post

"Here are three things I did while I read this book: laughed, cringed, and scribbled a whole slew of notes in the margins. In If You're In My Office, It's Already Too Late, James Sexton delivers frank, no-holds-barred advice, gleaned from the front lines of divorce. The real trick, though, is how he does it with so much love. Despite its wonderfully grim title, this is a book teeming with hope." —Grant Ginder, author of The People We Hate at the Wedding

"Wryly written with plenty of candid wit and straightforward opinions... Sexton’s enthusiasm and affinity for marriage stories is evident throughout as he examines issues such as honesty, sex negotiations, infidelity, long-term relationship 'slippage,' and that stinging realization that 'what’s fun when you’re dating is a pain in the ass when you’re married'... Sage counsel to help readers better navigate the trajectories of their own relationships." —Kirkus Reviews

“James J. Sexton's book is a delightful surprise. Sexton is not offering the usual how-to-have-a-happy marriage book, but rather a how-not-to-divorce book…Sexton doesn't judge. People fall in love then life interferes and marriages dissolve.” —The Newark Star Ledger