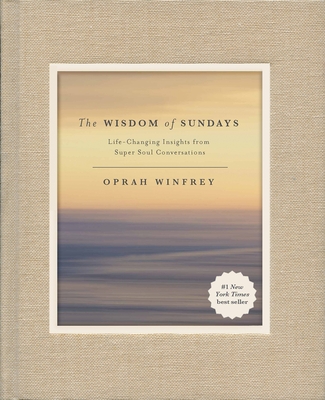 Oprah Winfrey says Super Soul Sunday is the television show she was born to do. “I see it as an offering,” she explains. “If you want to be more fully present and live your life with a wide-open heart, this is the place to come to.”

Now, for the first time, the aha moments of inspiration and soul-expanding insight that have enlightened millions on the three-time Emmy Award-winning Super Soul Sunday are collected in The Wisdom of Sundays, a beautiful, cherishable, deeply-affecting book.

Organized into ten chapters—each one representing a powerful step in Oprah’s own spiritual journey and introduced with an intimate, personal essay by Oprah herself—the Wisdom of Sundays features selections from the most meaningful conversations between Oprah and some of today’s most-admired thought-leaders. Visionaries like Tony Robbins, Arianna Huffington, and Shonda Rhimes share their lessons in finding purpose through mindfulness and intention. World renowned authors and teachers like Eckhart Tolle, Thich Nhat Hahn, Marianne Williamson and Wayne Dyer, explain our complex relationship with the ego and the healing powers of love and connection; and award-winning and bestselling writers like Cheryl Strayed, Elizabeth Gilbert, and Elizabeth Lesser explore the beauty of forgiveness and spirituality.

Paired with beautiful photographs, including many from Oprah’s private property in California where each episode of Super Soul Sunday is filmed, The Wisdom of Sundays promises to be a timeless keepsake that will help readers awaken to life’s wondrous possibilities and discover a deeper connection to the natural world around them.

Through the power of media, Oprah Winfrey has created an unparalleled connection with people around the world. As host and supervising producer of the top-rated, award-winning The Oprah Winfrey Show, she entertained, enlightened, and uplifted millions of viewers for twenty-five years. Her accomplishments as a global media leader and philanthropist have established her as one of the most respected and admired public figures today.