The Death of Democracy: Hitler's Rise to Power and the Downfall of the Weimar Republic (Hardcover) 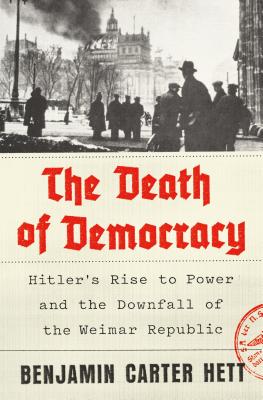 The Death of Democracy: Hitler's Rise to Power and the Downfall of the Weimar Republic (Hardcover)

A riveting account of how the Nazi Party came to power and how the failures of the Weimar Republic and the shortsightedness of German politicians allowed it to happen.

Why did democracy fall apart so quickly and completely in Germany in the 1930s? How did a democratic government allow Adolf Hitler to seize power? In The Death of Democracy, Benjamin Carter Hett answers these questions, and the story he tells has disturbing resonances for our own time.

To say that Hitler was elected is too simple. He would never have come to power if Germany’s leading politicians had not responded to a spate of populist insurgencies by trying to co-opt him, a strategy that backed them into a corner from which the only way out was to bring the Nazis in. Hett lays bare the misguided confidence of conservative politicians who believed that Hitler and his followers would willingly support them, not recognizing that their efforts to use the Nazis actually played into Hitler’s hands. They had willingly given him the tools to turn Germany into a vicious dictatorship.

Benjamin Carter Hett is a leading scholar of twentieth-century Germany and a gifted storyteller whose portraits of these feckless politicians show how fragile democracy can be when those in power do not respect it. He offers a powerful lesson for today, when democracy once again finds itself embattled and the siren song of strongmen sounds ever louder.

Benjamin Carter Hett is the author of The Death of Democracy, Burning the Reichstag, Crossing Hitler, and Death in the Tiergarten. He is a professor of history at Hunter College and the Graduate Center of the City University of New York, and holds a PhD in history from Harvard University and a law degree from the University of Toronto. He now lives in New York City.

"At a time of deep distress over the stability of democracy in America and elsewhere, Benjamin Carter Hett's chronicle of the collapse of the Weimar Republic and the rise of Adolf Hitler could not be more timely. 'The Death of Democracy' makes for chilling reading." -- Roger Lowenstein, The Washington Post

"If this is an oft-told and tragic tale, Hett's brisk and lucid study offers compelling new perspectives inspired by current threats to free societies around the world. . . . It is both eerie and enlightening how much of Hett's account rings true in our time." -- E. J. Dionne Jr., The Washington Post

“Particularly instructive. . . . a penetrating study of how Nazism overtook the Weimar Republic. Hett never mentions Trump; the societal parallels are, of course, far from exact. But his account carries a troubling ? and clearly intentional ? resonance.” -- Richard North Patterson, Huffington Post

“With a wealth of telling detail, a keen eye for human character, and a talent for gripping narrative, Benjamin Hett analyses the end of the Weimar Republic and the inauguration of the Nazi regime. It is a chilling and warning tale, for he shows that Hitler’s victory was by no means inevitable. Rather, it was the result of human folly, greed, selfishness and, on the part of those who invited him, an unwillingness to confront the true meaning of Nazism and a willful insistence that they could use Hitler.” —Margaret MacMillan, author of The War That Ended Peace: The Road To 1914

"Intelligent, well-informed... intriguing. Hett provides a lesson about the fragility of democracy and the danger of that complacent belief that liberal institutions will always protect us." -- The Times (London)

"Intelligently written. . . . a fast-paced narrative enlivened by vignette and character sketches. . . . Hett reminds us that violence was at [fascism's] core. But he also insists that Hitler did not prevail because Weimar was doing badly. On the contrary, it was doing remarkably well in tough conditions: the end came because conservative elites thought they could use the Nazis for their own purposes and realised their mistake too late." -- Mark Mazower, Financial Times

"Hett also reminds us that Hitler was deliberately enabled by conservative elites, especially business leaders and military commanders, who wanted the electoral votes of the Nazi movement and were willing to overlook its excesses to achieve their goals. . . . Hitler was also enabled by a disaffected public ‘increasingly prone to aggressive myth-making and irrationality.’ . . . At no point does Hett mention any current political figure by name, but his warning is nonetheless loud, clear, and urgent.” -- Booklist

“How did Adolf Hitler, an obvious extremist, con a nation into backing him? This historical essay answers the question, to often unsettling effect. . . . A provocative, urgent history with significant lessons for today.” -- Kirkus Reviews

"Persuasively challenges familiar arguments that the rise of Nazi Germany was an inevitable consequence of abstract forces. . . [A] page-turning account."--Publishers Weekly

“A brilliant account of the twentieth century’s great political catastrophe: the Nazi capture of power. Full of arresting images and ideas, this gripping new book charts the rise and fall of the first German republic, and the unlikely victory of Adolf Hitler. A timely reminder of the fragility of democracy and the dangers of extreme nationalism.”--Nikolaus Wachsmann, author of KL: A History of the Nazi Concentration Camps

“The story of how Germany turned from democracy to dictatorship in the fifteen years following World War I is not a simple one. But the moral lessons are exceptionally clear. Benjamin Carter Hett honors that complexity in this account while never straying from the path of moral clarity. An outstanding accomplishment.”--Rick Perlstein, author of Nixonland and The Invisible Bridge

“Benjamin Carter Hett is one of the few historians who is able to think out of the box and knows how to tell a story well – without simplifying it. His new book tackles one of the most interesting questions in German history: How was it possible that an educated and developed country like Germany could fall for Adolf Hitler?”
--Stefan Aust, editor of Die Welt, former editor of Der Spiegel, and author of The Baader-Meinhof Complex

“The Death of Democracy is a thought-provoking new look at the collapse of German democracy in 1930-34 with a clear and careful emphasis on those individuals who operated behind the scenes to bring Hitler to power. Benjamin Carter Hett also offers insight into the steps Hitler took to consolidate his power.”
--Gerhard L. Weinberg, professor emeritus of history, University of North Carolina

“Histories of Nazi Germany can be overwhelming. The Death of Democracy is carefully focused on the conditions and cynical choices that enabled Nazism, in just a few years turning one of the world’s most advanced and liberal societies into a monstrosity. Its author is also that rarity, a specialist who writes lucidly and engagingly. In this post-truth, alternative-facts American moment, The Death of Democracy is essential reading.” --Kurt Andersen, author of Fantasyland: How America Went Haywire, A 500-Year History