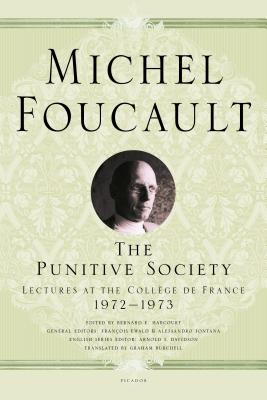 These thirteen lectures on the 'punitive society,' delivered at the Collège de France in the first three months of 1973, examine the way in which the relations between justice and truth that govern modern penal law were forged, and question what links them to the emergence of a new punitive regime that still dominates contemporary society.


Praise for Foucault's Lectures at the Collège de France Series

“Ideas spark off nearly every page...The words may have been spoken in [the 1970s], but they seem as alive and relevant as if they had been written yesterday.”—Bookforum

“Foucault is quite central to our sense of where we are...[He] is carrying out, in the noblest way, the promiscuous aim of true culture.”—The Nation

“[Foucault] has an alert and sensitive mind that can ignore the familiar surfaces of established intellectual coded and ask new questions...[He] gives dramatic quality to the movement of culture.”—The New York Review of Books

“Delivered shortly after the dissolution of Group d’Information sur les Prisons, Foucault’s third lecture course at the Collège de France coincided with a significant change in his thinking about prisons, as he began to reflect on the disciplinary power at work in prisons and in society more generally. … Summing Up: Essential. Lower-division undergraduates through faculty; general readers.” —A. D. Schrift, Choice, Vol. 53 (9), May, 2016

“Bernard Harcourt … has done a fantastic job establishing the text of the lectures … . He provides us with countless erudite references to Foucault’s unacknowledged as well as acknowledged sources and supplies a clear, fair-minded and modest commentary. The editors of the series and Harcourt’s research assistants also need our thanks as well. But in the end, it is Graham Burchell’s superb translation and Harcourt’s absolutely rigorous editing work … that ought to receive our everlasting thanks.”—Mariana Valverdem, British Journal of Criminology, Vol. 57 (1), January, 2017

“[Foucault] must be reckoned with.” —The New York Times Book Review

“Ideas spark off nearly every page of this book, as Foucault manages to reinvigorate questions of power and violence that might have seemed well-worn. The words may have been spoken in 1976, but they seem as alive and relevant as if they had been written yesterday.” —Bookforum

“Foucault is quite central to our sense of where we are.” —The Nation

“[Foucault] has an alert and sensitive mind that can ignore the familiar surfaces of established intellectual coded and ask new questions [He] gives dramatic quality to the movement of culture.” —The New York Review of Books

“These lectures offer important insights into the evolution of the primary focus of Foucault's later work the relationship between power and knowledge.” —Library Journal