Under the Knife: A History of Surgery in 28 Remarkable Operations (Hardcover) 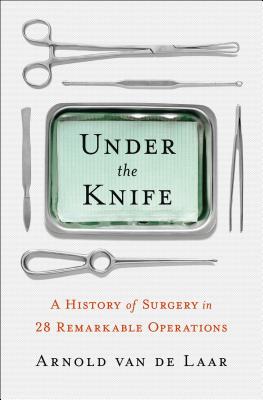 Under the Knife: A History of Surgery in 28 Remarkable Operations (Hardcover)

Surgeon Arnold van de Laar uses his own experience and expertise to tell this engrossing history of surgery through 28 famous operations—from Louis XIV and Einstein to JFK and Houdini.

From the story of the desperate man from seventeenth-century Amsterdam who grimly cut a stone out of his own bladder to Bob Marley's deadly toe, Under the Knife offers a wealth of fascinating and unforgettable insights into medicine and history via the operating room.

What happens during an operation? How does the human body respond to being attacked by a knife, a bacterium, a cancer cell or a bullet? And, as medical advances continuously push the boundaries of what medicine can cure, what are the limits of surgery?

With stories spanning the dark centuries of bloodletting and amputations without anaesthetic through today's sterile, high-tech operating rooms, Under the Knife is both a rich cultural history, and a modern anatomy class for us all.

Arnold van de Laar is a surgeon in the Slotervaart Hospital in Amsterdam, specialising in laparoscopic surgery. Born in 1969 in the Dutch town of 's-Hertogenbosch, van de Laar became fascinated by how the human body works in school biology lessons and went on to study medicine at the Belgian University of Leuven. Having travelled the world - the Himalayas, Bhutan, Tibet, Nepal, Kashmir, and extensively in Africa - van de Laar took his first job as general surgeon on the Caribbean Island of Sint Maarten. He started writing pieces on surgical history in the Dutch medical journal Nederlands Tijdschrift voor Heelkunde in 2009. He now lives in Amsterdam with his wife and two children where, a true Dutchman, he cycles to work every day. Under the Knife is his first book.

"Working fast and taking risks, early surgeons were outsiders to medicine...as van de Laar reminds us in Under the Knife, a collection of hypervivid anecdotes and oddities, it was only recently that surgeons were considered the equals of what we would now call internists...full of startling tales of slicing and stitching." —Wall Street Journal

"Beyond his interesting review of surgical history, van de Laar also offers insight into the thought process and philosophy of those who cut to heal." —Booklist

"van de Laar devotes his first book to vivid descriptions of notable surgeries, from ancient times to the present....Fast-paced and lucid."—Publishers Weekly

“[An] utterly eccentric and riveting collection.” —The Mail on Sunday