Strange Bedfellows: Adventures in the Science, History, and Surprising Secrets of STDs (Paperback) 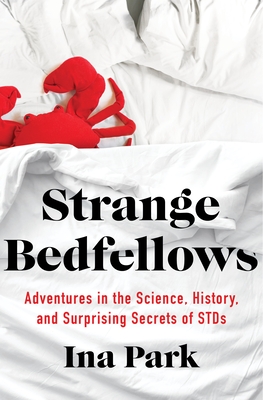 Strange Bedfellows: Adventures in the Science, History, and Surprising Secrets of STDs (Paperback)

"Joyful and funny . . . Park uses science, compassion, humor, diverse stories and examples of her own shame-free living to take the stigma out of these infections." —The New York Times

With curiosity and wit, Strange Bedfellows rips back the bedsheets to expose what really happens when STDs enter the sack.

Sexually transmitted diseases have been hidden players in our lives for the whole of human history, with roles in everything from World War II to the growth of the Internet to The Bachelor. But despite their prominence, STDs have been shrouded in mystery and taboo for centuries, which begs the question: why do we know so little about them?

Enter Ina Park, MD, who has been pushing boundaries to empower and inform others about sexual health for decades. With Strange Bedfellows, she ventures far beyond the bedroom to examine the hidden role and influence of these widely misunderstood infections and share their untold stories.

Covering everything from AIDS to Zika, Park explores STDs on the cellular, individual, and population-level. She blends science and storytelling with historical tales, real life sexual escapades, and interviews with leading scientists—weaving in a healthy dose of hilarity along the way.

The truth is, most of us are sexually active, yet we’re often unaware of the universe of microscopic bedfellows inside our pants. Park aims to change this by bringing knowledge to the masses in an accessible, no-nonsense, humorous way—helping readers understand the broad impact STDs have on our lives, while at the same time erasing the unfair stigmas attached to them.

A departure from the cone of awkward silence and shame that so often surrounds sexual health, Strange Bedfellows is the straight-shooting book about the consequences of sex that all curious readers have been looking for.

INA PARK MD, MS, is a professor at the University of California San Francisco School of Medicine, Medical Consultant at the Centers for Disease Control and Prevention, Division of STD Prevention, and Medical Director of the California Prevention Training Center. She holds degrees from the University of California Berkeley, UCLA School of Medicine, and the University of Minnesota School of Public Health. Recently, Park served as a co-author of the 2020 CDC STD Treatment Guidelines and contributor to the Department of Health and Human Services STI Federal Action Plan. A fierce advocate for public health, she lives in Berkeley, CA with her husband and two sons.

"Strange Bedfellows—a book about how infections and viruses spread—is incredibly relevant to our time. But it is so much more than that: it’s about desire, it’s about history, it’s about humanity itself. Ina Park reveals the mystery and fascination inherent in STDs and, improbably, she does it while being laugh-out-loud funny."
—Peggy Orenstein, author of the New York Times bestsellers Boys and Sex and Girls and Sex

"Ina Park is a seasoned expert with a finely calibrated sense of the absurd. In other words, she is exactly who you want writing a book about STDs. The science is here, but so too are the stories and people behind it. Park has a mission—to break down the stigma and clear the way for open conversation and wider funding. She's a hero and a hoot!"
—Mary Roach, author of the New York Times bestsellers Bonk and Stiff

"Dr. Ina Park’s passion for her subject is contagious. With gripping stories and the right dose of wit, Strange Bedfellows uncovers the wily world of microbes and reveals the shocking history of sexually transmitted diseases. Plus, Dr. Park is funny. You’ll LOL as she ventures into topics most of us consider TMI. She answers every question you ever had about infections down there and even those you never thought to ask."
—Randi Hutter Epstein MD, MPH, author of Aroused

"With wisdom and wit, passion and dispassion, Park uses case narratives and deep clinical knowledge to inform her readers of the importance of sexually transmitted infections. Rescuing these infections from silence and stigma, she offers clear and effective approaches to prevention and treatment for patients and the public."
—Allan M. Brandt, Kass Professor of the History of Medicine at Harvard University and author of No Magic Bullet

"Strange Bedfellows is so much more than a fresh take on the biggest issues of 2021. It’s joyful and funny . . . Great writing about sex meets readers where they are, and it invites them through the door of evidence-based sex education, into a world where shame simply can’t exist. Park uses science, compassion, humor, diverse stories, and examples of her own shame-free living to take the stigma out of these infections."
—The New York Times

"Informative and frank, Park’s account of sex and STDs is ideal both for the curious and for those too embarrassed to ask."
—Publishers Weekly

"A thoughtful, informative account for readers interested in public health and sexual health as well as those with an interest in the history of medicine. Park brings the right amount of care to an often-stigmatized subject."
—Library Journal

"Through intriguing anecdotes, [Park] covers the science behind the treatment and prevention of STIs."
—Scientific American

"Park is a woman with a mission: to destigmatise STIs, while engaging her readers through the fascinating stories she has heard or experienced first-hand during her career, together with her inimitable sense of humour . . . The humour and charm of Strange Bedfellows will surely help to break the cone of awkward silence and shame surrounding the topic among its readers, providing a seemingly unending array of interesting conversation starters for those brave enough to take the first step."
—Lancet

"From HPV (human papillomavirus) to syphilis to HIV to homely old genital herpes, [Strange Bedfellows] probes into every cranny of its many subjects, and Park writes about all of it with a commonizing touch that’s wonderfully inviting."
—Open Letters Review