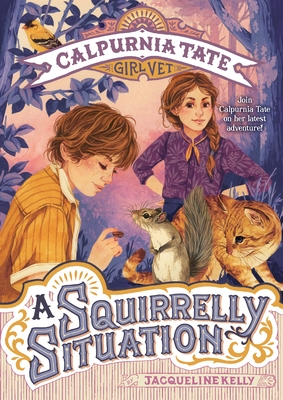 This is book number 5 in the Calpurnia Tate, Girl Vet series.

When Travis finds an abandoned baby squirrel, he brings him home and names him Fluffy. But Mother isn’t so sure that Fluffy is such a great family pet—and neither is Thud, the cat. Will Fluffy be able to steer clear of these two and find a home in the Tate household?

Jacqueline Kelly won the Newbery Honor for her first book, The Evolution of Calpurnia Tate. She was born in New Zealand and raised in Canada, in the dense rainforests of Vancouver Island. Her family then moved to El Paso, Texas, and Kelly attended college in El Paso, then went on to medical school in Galveston. After practicing medicine for many years, she went to law school at the University of Texas, and after several years of law practice, realized she wanted to write fiction. Her first story was published in the Mississippi Review in 2001. She now makes her home with her husband and various cats and dogs in Austin and Fentress, Texas.

Jennifer L. Meyer is an award-winning artist whose work has been featured multiple times in the Best in Contemporary Fantastic Art annual, Spectrum. Born into a fantasy-loving military family, she grew up a big fan of comics, reading, and drawing animals (especially bunnies). Jennifer's art has appeared in comic books, children's books, graphic novels, and other media. She is the illustrator of the Calpurnia Tate, Girl Vet series by Jacqueline Kelly.

Praise for The Curious World of Calpurnia Tate:

“Six years after debuting in Kelly's Newbery Honor-winning The Evolution of Calpurnia Tate, the budding Texas scientist returns, as curious and charming as ever, and now preoccupied with fauna instead of flora . . . Happily, the episodic narrative leaves the door wide open for further adventures—if we're lucky.” —Publishers Weekly, starred review on The Curious World of Calpurnia Tate

“Animal lovers will revel in the abundant anecdotes about the benevolent country vet and Travis' mangy strays—some heart-wrenching, some hilarious—while learning plenty about nature ("from pond water up to the stars"), the deadly 1900 Galveston hurricane, and early Texas history as recounted by Callie's scholarly and beloved Granddaddy. A warm, welcome stand-alone companion to Kelly's lauded debut.” —Kirkus Reviews, starred review on The Curious World of Calpurnia Tate

“Well worth waiting for . . . Readers will flock to this sequel” —Booklist, starred review on The Curious World of Calpurnia Tate

Praise for The Evolution of Calpurnia Tate:

“In her debut novel, Jacqueline Kelly brings to vivid life a boisterous small-town family at the dawn of a new century. And she especially shines in her depiction of the natural world that so intrigues Callie . . . Readers will want to crank up the A.C. before cracking the cover, though. That first chapter packs a lot of summer heat.” —The Washington Post on The Evolution of Calpurnia Tate