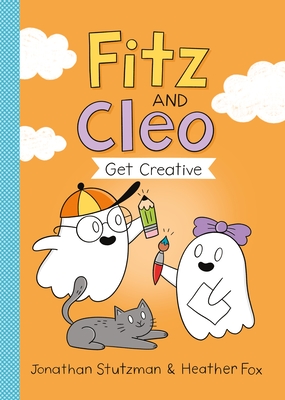 This is book number 2 in the A Fitz and Cleo Book series.

The dynamo team behind Llama Destroys the World continue their delightful and hilarious ghostly hijinks in their early reader graphic novel series, perfect for fans of Elephant & Piggie and Narwhal & Jelly.

Fitz and Cleo are:

These two know how to keep spirits high and the good times rolling! In their first-ever second book, join the most adorable apparitions this way of the afterlife through ten gut-busting creative farces, including flexing their storytelling muscles with ghost stories, songwriting, and directing their first film.

Jonathan Stutzman is an award-winning filmmaker and a picture book author. He is the author of numerous books for children, including Don't Feed the Coos, Santa Baby, the Llama trilogy, and the Tiny T-Rex series. He received his masters at Temple University for film and digital media. He lives in Lititz, Pennsylvania, with his wife, the illustrator Heather Fox. Fitz and Cleo is his debut graphic novel.

Heather Fox is an illustrator and graphic designer, creating art in pen and ink, digital, and gouache. She is the illustrator of Don't Feed the Coos, Santa Baby, and the Llama trilogy. She lives in Lititz, Pennsylvania, with her husband, the writer Jonathan Stutzman. Fitz and Cleo is her debut graphic novel.

Praise for the Llama series!

"[W]ill have everyone laughing out loud." -Romper