The Wilderwomen: A Novel (Hardcover) 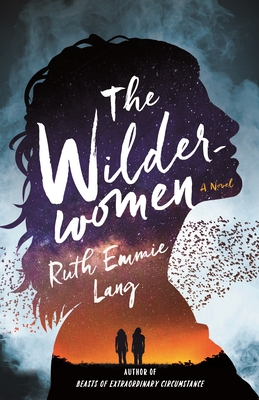 The Wilderwomen: A Novel (Hardcover)

"Exquisitely drawn characters imbue Lang’s unconventional plot with verisimilitude and heart, inspiring readers to ponder whether the world is stranger and more beautiful than it appears. Effervescent, ethereal, and suffused with wonder." — Kirkus (starred review)

"Lang’s melancholy, atmospheric writing sets the perfect tone as the Wilder sisters unravel the mystery. The result is a cozy supernatural outing perfect for an autumn night." —Publisher's Weekly

Five years ago, Nora Wilder disappeared. The older of her two daughters, Zadie, should have seen it coming, because she can literally see things coming. But not even her psychic abilities were able to prevent their mother from vanishing one morning.

Zadie’s estranged younger sister, Finn, can’t see into the future, but she has an uncannily good memory, so good that she remembers not only her own memories, but the echoes of memories other people have left behind. On the afternoon of her graduation party, Finn is seized by an “echo” more powerful than anything she’s experienced before: a woman singing a song she recognizes, a song about a bird…

When Finn wakes up alone in an aviary with no idea of how she got there, she realizes who the memory belongs to: Nora.

Now, it’s up to Finn to convince her sister that not only is their mom still out there, but that she wants to be found. Against Zadie’s better judgement, she and Finn hit the highway, using Finn’s echoes to retrace Nora’s footsteps and uncover the answer to the question that has been haunting them for years: Why did she leave?

But the more time Finn spends in their mother’s past, the harder it is for her to return to the present, to return to herself. As Zadie feels her sister start to slip away, she will have to decide what lengths she is willing to go to find their mother, knowing that if she chooses wrong, she could lose them both for good.

Ruth Emmie Lang was born in Glasgow, Scotland and has the red hair to prove it. When she was four years old, she immigrated to Ohio where she has lived ever since. She has since lost her Scottish accent, but still has the hair. Ruth lives with her husband and son on two wooded acres in the Cleveland area. Her first novel, Beasts of Extraordinary Circumstance, was a finalist for the Ohioana Book Award.

"Exquisitely drawn characters imbue Lang’s unconventional plot with verisimilitude and heart, inspiring readers to ponder whether the world is stranger and more beautiful than it appears. Effervescent, ethereal, and suffused with wonder." — Kirkus (starred review)

"Lang’s melancholy, atmospheric writing sets the perfect tone as the Wilder sisters unravel the mystery. The result is a cozy supernatural outing perfect for an autumn night." —Publisher's Weekly

"Ruth Emmie Lang’s sophomore novel is an exquisitely woven story of sisterhood and the subtleties of magic. Lang has done it again, and crafted a truly unforgettable book!” —Shea Ernshaw, New York Times bestselling author of A History of Wild Places

"A psychedelic dream of a story! In The Wilderwomen Ruth Emmie Lang spins a complex tale of three women whose gifts set them apart from the world and each other. Their struggle to reconnect and solve the mystery of their mother's disappearance makes for a wild ride. With sparky dialogue and terrific storytelling, Ruth Emmie Lang will have you hooked!" —Paula Brackston, New York Times bestselling author of The Witch's Daughter

"The world needs more stories about sisters on road trips, and The Wilderwomen is here to set us on the right path. Ruth Emmie Lang uses a touch of the fantastic to propel a family mystery and a missing person case, but mostly she gives us beautiful landscapes, two very different sisters coming of age, and a compelling cast of characters they meet along their wild way.” —Laurie Frankel, New York Times bestselling author of One Two Three