Three Wise Men: A Navy SEAL, a Green Beret, and How Their Marine Brother Became a War's Sole Survivor (Hardcover) 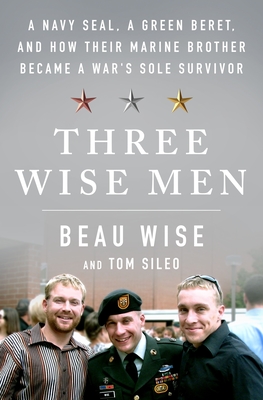 Three Wise Men: A Navy SEAL, a Green Beret, and How Their Marine Brother Became a War's Sole Survivor (Hardcover)

From Beau Wise and Tom Sileo comes Three Wise Men, an incredible memoir of family, service and sacrifice by a Marine who lost both his brothers in combat—becoming the only "Sole Survivor" during the war in Afghanistan.

Shortly after the 9/11 attacks, three brothers by blood became brothers in arms when each volunteered to defend their country. No military family has sacrificed more during the ensuing war, which has become the longest ever fought by America’s armed forces.

While serving in Afghanistan, US Navy SEAL veteran and CIA contractor Jeremy Wise was killed in an al Qaeda suicide bombing that devastated the US intelligence community. Less than three years later, US Army Green Beret sniper Ben Wise was fatally wounded after volunteering for a dangerous assignment during a firefight with the Taliban. Ben was posthumously awarded the Silver Star, while Jeremy received the Intelligence Star—one of the rarest awards bestowed by the U.S. government—and also a star on the CIA’s Memorial Wall.

United States Marine Corps combat veteran Beau Wise is the only known American service member to be pulled from the battlefield after losing two brothers in Afghanistan. Told in Beau’s voice, Three Wise Men is an American family’s historic true story of service and sacrifice.

SERGEANT BEAU WISE served on active duty in the Marine Corps from 2008 to 2016 with First Battalion / Third Marines; Marine Corps Security Forces; and India Company Third Battalion / Twenty-third Marines. He is the only known American service member to receive the Department of Defense’s “Sole Survivor” designation as a result of the nineteen-plus-year war in Afghanistan. Three Wise Men is his first book.

TOM SILEO is an author, contributing senior editor of The Stream, and recipient of the Marine Corps Heritage Foundation’s 2016 General Oliver P. Smith Award for distinguished reporting. Tom has written several books, including Brothers Forever and Be Bold.

"It's an important story that everybody needs to hear." —Anderson Cooper, CNN

"This is what Memorial Day is about." —Martha Raddatz, ABC News

"In this unforgettable narrative, we follow the close-knit Wise brothers, all of whom heard the call to serve and answered it…The book opens with a somber tone, at Jeremy’s funeral. ... a consistently absorbing story of the 9/11 generation and of America’s response to global terror, a topic still relevant today." —Kirkus (starred review)

“Many American families have sacrificed much for our freedom, but few if any in modern times have given as much as the Wise family from my home state of Arkansas. Brothers Jeremy, Ben, and Beau Wise all signed up to serve in the military. Jeremy became a Navy Seal, Ben became part of the Army Green Berets, and Beau joined the Marines. Jeremy and Ben were both killed in Afghanistan, 3 years apart. Only Beau has survived. Despite an unthinkable sorrow, the Wise family have held to their faith and their love of country. Theirs is the story of true heroes—those who gave their lives as well as those who remain to carry on and honor the memory of Jeremy and Ben. Mary Wise, the mother of these three young men, is the only Mother in America who has lost 2 sons in Afghanistan. Tom Sileo’s gripping story brings the story to life in this powerful book “Three Wise Men.” It’s a story that needs to be told and more importantly, needs to be read and shared. It will remind you that America is a great country because of great, God-fearing people who pay a price for all of us." —Mike Huckabee, 44th Governor of Arkansas

“Three Wise Men is a story of uncommon heroism by an American family in defense of our freedom. As CIA Director, I sent Jeremy forward to Afghanistan to defeat Al Qaeda. As Secretary of Defense, I sent Ben forward to Afghanistan to defeat the Taliban. I will never forget the day we lost Jeremy, and I will never forget learning that his brother Ben had also made the ultimate sacrifice. The most difficult responsibility I had was to write notes of condolence to their mother on the loss of her sons. This book by Beau Wise and Tom Sileo is a tribute to the Wise brothers, their family, and the legacy of patriotism they left in their service to our great nation.” —Leon Panetta, former Director of the CIA and Secretary of Defense

"Three Wise Men is a moving and powerful book that relates the humanity and commitment of a family that paid a painfully high price in defense of freedom. The story of service and sacrifice is emotional in and of itself, but the fact that the Wises were my childhood neighbors made it even more emotional for me." —Matthew J. Shepherd, Arkansas Speaker of the House

"After losing my friends in Afghanistan, I resolved to spend the rest of my life honoring the fallen, their families and my fellow veterans. By writing Three Wise Men with Tom Sileo, Beau Wise has not only paid tribute to Jeremy and Ben, but all who've served and sacrificed during the post-9/11 wars our military has fought. We are all brothers and sisters in arms." —Flo Groberg, Medal of Honor recipient, Boeing Chief of Staff & author of 8 Seconds of Courage

"Three brothers went overseas to fight America’s war on terrorism, and only one came home. Three Wise Men, by sole-survivor Beau Wise, is a stirring and intimate portrait of young men at war in Afghanistan and Iraq, and an unforgettable story of one family’s incredible sacrifice." —Joby Warrick, Washington Post reporter and Pulitzer Prize-winning author of The Triple Agent and Black Flags: The Rise of ISIS

"A poignant look at love and loss; sacrifice and honor. I’m reminded of Lincoln’s famous letter to the mother who lost her sons on the altar of freedom." —Mike Beebe, 45th Governor of Arkansas

"The story of a Marine, Green Beret soldier, and Navy SEAL turned CIA contractor, the Wise brothers embody the sacrifice of service and the relentless spirit of the American patriots’ will to fight when called upon. Three lives on separate paths but intertwined by the Global War on Terrorism, this story becomes a modern-day Saving Private Ryan when the surviving sibling is barred from the battlefield. With ties to the Osama Bin Laden manhunt and the ground fighting in Afghanistan and Iraq; Three Wise Men runs the gamut of our current entanglements and legacies. Our nation is forever indebted to the Wise family, and the thousands of others just like them who have sacrificed on all levels. Semper Fidelis." —Michael Golembesky, New York Times bestselling author of Level Zero Heroes & Dagger 22