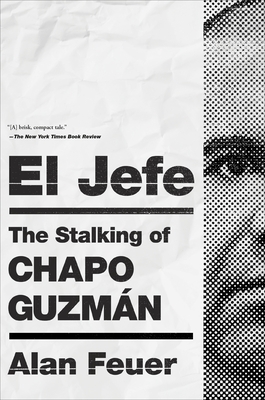 El Jefe is the definitive account of the rise and fall of the ultimate narco, "El Chapo," from the New York Times reporter whose coverage of his trial went vira.l

Joaquin “El Chapo” Guzman is the most legendary of Mexican narcos. As leader of the Sinaloa drug cartel, he was one of the most dangerous men in the world. His fearless climb to power, his brutality, his charm, his taste for luxury, his penchant for disguise, his multiple dramatic prison escapes, his unlikely encounter with Sean Penn—all of these burnished the image of the world's most famous outlaw. He was finally captured by U.S. and Mexican law enforcement in a daring operation years in the making. Here is that entire epic story—from El Chapo's humble origins to his conviction in a Brooklyn courthouse.

Longtime New York Times criminal justice reporter Alan Feuer's coverage of his trial was some of the most riveting journalism of recent years. Feuer’s mastery of the complex facts of the case, his unparalleled access to confidential sources in law enforcement, and his powerful understanding of disturbing larger themes—what this one man's life says about drugs, walls, class, money, Mexico, and the United States—will ensure that this is the one book to read about “El Chapo.”

"[A] fast-paced tale of the decades-long quest to capture a notorious drug kingpin... Feuer builds a taut narrative of the cat-and-mouse game that found Guzmán...[and] he knows how to spin a tale. Fans of Don Winslow’s fiction and Mark Bowden’s nonfiction alike will be eager to read Feuer’s blood-spattered tale." - Kirkus Reviews

"[A] brisk, rich account of the kingpin’s rise to power and his downfall" - The New York Times

"Perhaps no one alive incites fear and fascination quite like Joaquín 'El Chapo' Guzmán.... A reporter for the New York Times, Mr Feuer covered Mr Guzmán’s trial in New York...“El Jefe” builds upon that reportage by diving into the events leading up to the courtroom drama, from Mr Guzmán’s beginnings as a small-time marijuana farmer to the joint Mexican-American operation that ultimately brought him down. Through the lens of Mr Guzmán’s life, Mr Feuer reveals much about society and the drug trade in both Mexico and America." - The Economist